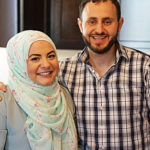 In 2015, Amanda Saab lit up screens all over the world on Master Chef. She was the first hijab-wearing American Muslim contestant on a major reality TV show. Hate tweets and painfully racist Facebook messages started to outweigh the positive messages she was receiving. It was an incredibly painful time for Amanda and her husband Hussein. In a stroke of great bravery, Amanda decided that she needed to counteract the ignorance and loathing of Muslims in America, and with an open heart, the couple began to invite strangers into their home. Amanda cooked a beautiful meal and allowed people of other faiths to ask her and Hussein any and all questions about Islam. After the first few dinners, the couple met Michael Hebb, who has been convening topic-based dinners for the past two decades and together they decided it was time to share this concept on a national stage.
( www.muslimneighbor.com)