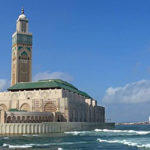 Casablanca: “The most beautiful religious building in the world”: this is how French-German television channel ARTE described Morocco’s largest Mosque Hassan II. The channel has broadcast a seven-minute video reportage about the Moroccan mosque, giving its audiences breathtaking views of the mosque and its surroundings from the sky. The reportage tells the story of one of the largest mosques in the world, whose minaret is 210 meters (689 ft). The mosque was built partially on land and partially over the Atlantic Ocean in the space of nine hectares. Exploring the beauty of its interior and exterior architecture, Arte describes the Hassan II mosque as the “iconic monument of the white city [Casablanca].”
The mosque was commissioned by late King Hassan II on July 9, 1989, and was completed on August 30, 1993. “The mosque has an architecture as found in churches. This represents first of all innovation in architecture, but also shows how Morocco is a country that includes several religions living together in peace,” a tour guide told ARTE.