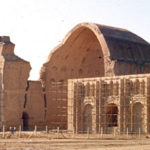 Baghdad: A group of Christians from Baghdad who visited the ruins of the Church of Kokheh, located 20 miles (32 kms) south of the Iraqi capital, were spontaneously invited by the local Muslim community for lunch after their tour. The historical Church of Kokheh is one of the early points of departure of Christianity in the Middle East, Father Mansour al-Makhlissi, founder and head of the Center for Eastern Studies at the Roman Catholic Church in Baghdad, told the visitors as he took them around the site of the church recently. “It was the patriarchal residence of the Eastern Church for centuries,” he said, adding that 24 patriarchs were buried in the church built by Saint Mari in the first century. Over the past 20 years, Christians could not visit the remnants of the church due to safety concerns, most recently due to the attacks by the so-called ‘Islamic State’.
With the area now more secure, the Center for Eastern Studies organized the visit to the Church of Kokheh. The current al-Mada’in district was called Ctesiphon or Taysafun in ancient times, and served as the winter capital of the Parthian Empire and later of the Sasanian Empire.
Following the tour, Sheikh Saad Thabit al-Jubouri, a prominent local tribal leader in al-Mada’in, offered the group a lunch, even though most of the Muslims were fasting for Ramadan. During the meal, the local Muslim community and the visiting Christians talked about the restoration of the Church of Kokheh. They agreed to work on a plan together to reconstruct the site with the support of the government and organizing tours to the church for Christians in and outside Iraq. This cooperation unites Muslims and Christians, Father Maissar, the minister of St. George Chaldean Church, said.
(Extracted from al-monitor.com)