Dementia is a general term for a decline in mental ability, severe enough to interfere with daily life. Memory loss is an example. Alzheimer’s is the most common type of dementia. Dementia is not a specific disease. It’s an overall term that describes a wide range of symptoms associated with a decline in memory or other thinking skills severe enough to reduce a person’s ability to perform
everyday activities. Alzheimer’s disease accounts for 60 to 80 percent of cases. Vascular dementia, which occurs after a stroke, is the second most common dementia type. But there are many other conditions that can cause symptoms of dementia, including some that
are reversible, such as thyroid problems and vitamin deficiencies.

Dementia is often incorrectly referred to as “senility” or “senile dementia,” which reflects the formerly widespread, but incorrect belief that serious mental decline is a normal part of aging. While symptoms of dementia can vary greatly, at least two of the following core mental functions must be significantly impaired to be considered dementia:
“¢ Memory
“¢ Communication and language
“¢ Ability to focus and pay attention
“¢ Reasoning and judgment
“¢ Visual perception
People with dementia may have problems with shortterm memory, keeping track of a purse or wallet, paying bills, planning and preparing meals, remembering appointments or traveling out of the neighborhood. Many dementias are progressive, meaning symptoms start out slowly and gradually get worse. If anyone is experiencing memory difficulties or other changes in
thinking skills, don’t ignore them. See a doctor soon to determine the cause. 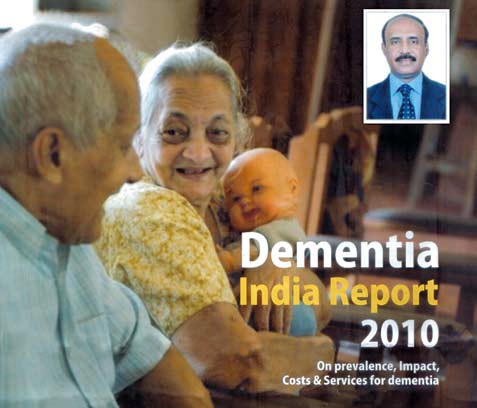 The Alzheimer’s and Related Disorders Society of India (ARDSI) held a series of regional consultative meetings in 2009 and 2010 with all key stake holders to develop a comprehensive report on dementia. This idea was taken up after learning the successful launch of

similar reports in countries like UK, France, Australia, South Korea and USA and its impact on the policies of their governments. The deliberations at these regional and national meetings were collected and a group of experts from India and abroad were assigned to write the report for India in April 2010. The Dementia India reports first discuss the problem of dementia and its psychosocial management. It focuses on caregivers issues. It also stresses the public health aspect of creating awareness and possible ways of prevention. The report estimates wider impact of the devastating illness on the affected people, their families and the country. The report proposes possible steps to address the public health challenges posed by dementia, the importance of early identification and the need for simple effective intervention. Number of persons with dementia In the last 10 years, the evidence of
dementia prevalence in India had increased considerably. More than 42,000 older people have been studied by eight centres in 5 urban and 4 rural sites across the country and there are wide variations in estimates. Prevalence of dementia using survey diagnosis or clinical diagnosis of DSM IV or ICD 10 reported from Indian studies amongst the elderly, range from 0.6 per cent to 10.6 per cent in rural areas and 0.9 per cent to 7.5 per cent in urban areas. The heterogeneity in reported prevalence could be due to lack of sensitive and specific local measures of assessment, being predominantly rural, important protective family structures,differing lifestyles and diet rich in antioxidants. Methodological problems in the studies may also account for the regional differences.

For the year 2010, an estimated 3.7 million people aged over 60 have dementia (2.1 million women and 1.6 million men). The prevalence of dementia increased steadily with age and higher prevalence was seen in older women than men. The larger population of older women than men who have dementia may be due to the fact that women live longer in India. In India, the number of people with
Alzheimer’s Disorder and other dementias is increasing every year because of the steady growth in the older population and stable increase in life expectancy. Thus, an estimated two-fold increase by 2030 and three-fold by 2050 can be expected. Barriers to Dementia Care in India Stigma Lack of awareness, feeling that nothing can be done. Low health seeking behavior for memory
problems, feeling that it is part of normal aging. 3.7 million people with dementia and fewer specialists manpower to manage them.
Lack of policy initiatives for people with dementia Lack of training and support. Service needs scaling up. Poor awareness even within the medical fraternity Lack of funds for dementia services, research and training. (The writer is National Chairman, ARDSI and Chairman elect ADI) (Source :This article was first published in IQRA-Magazine of Yenepoya University, January 2012)