The economically wealthy have built up a stranglehold over global wealth. They write laws for the legislatures which favour the elite, own media that suppresses the cause of the poor, indulge in tax evasion and park their money abroad. 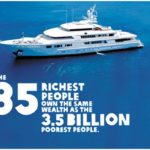 Economic inequality is one of the most serious risks to human progress. If such inequalities are not checked in time, political institutions become captive in the hands of the elite, who undermine the interests of the poor, who constitute majority in the world. So, the question is how to reverse the process currently on in India due to political power getting concentrated in the hands of a clique that is pushing the nation onto the trajectory of relentless capitalism and uses religio-nationalism to hoodwink the masses of the real intention of undermining democracy.
Some economic inequality is essential to drive growth and progress, rewarding those with talent, hard-earned skills and the ambition to innovate and take entrepreneurial risks. However, the extreme levels of wealth concentration occurring today threaten to exclude hundreds of millions of people from realizing the benefits of their talents and hard work. It is already happening in countries like the United States, where bills and laws are now written by corporates and passed on to the legislatures. As US Supreme Court Justice Louis Brandeis famously said, ‘We may have democracy, or we may have wealth concentrated in the hands of the few, but we cannot have both.’
Given the scale of rising wealth concentrations, opportunity capture and unequal political representation are a serious and worrying trend. For instance:
“¢ Almost half of the world’s wealth is now owned by just 1% of the population.
“¢ The wealth of the 1% richest people in the world amounts to $110 trillion. That’s 65 times the total wealth of the bottom half of the world’s population.
“¢ The bottom half of the world’s population owns the same as the richest 85 people in the world.
Seven out of ten people live in countries where economic inequality has increased in the last 30 years.
“¢ The richest 1% increased their share of income in 24 out of 26 countries for which we have data between 1980 and 2012.
“¢ In the US, the wealthiest 1% captured 95% of post-financial crisis growth since 2009, while the bottom 90% became poorer.
This massive concentration of economic resources in the hands of fewer people presents a significant threat to inclusive political and economic systems. Instead of moving forward together, people are increasingly separated by economic and political power, inevitably heightening social tensions and increasing the risk of societal breakdown.

Oxfam’s polling from across the world captures the belief of many that laws and regulations are now designed to benefit the rich. A survey in six countries (Spain, Brazil, India, South Africa, the UK and the US) showed that a majority of people believe that laws are skewed in favor of the rich”in Spain, eight out of 10 people agreed with this statement. Another recent Oxfam poll of low-wage earners in the US reveals that 65% believe that Congress passes laws that predominantly benefit the wealthy.

Some highlights of the Oxfam report:
One percent of the world’s families own almost half (46%) of the world’s wealth. The bottom half of the world’s population owns less than the richest 85 people in the world.
In the past year, 210 people have become billionaires, joining a select group of 1,426 individuals with a combined net worth of $5.4 trillion.
The wealth of the 1% richest people in the world amounts to $110 trillion. That’s 65 times the total wealth of the bottom half.
The 2008 crisis caused a dip in the wealth of the rich. But they have already gained it back, and more. In the US, the wealthiest 1% captured 95% of post-financial crisis growth between 2009 and 2012, while the bottom 90% became poorer
An important indicator of rich growing richer is that while corporate profits soar to new heights, the wages of the workers have remained stagnant.
The combined wealth of Europe’s 10 richest people exceeds the total cost of stimulus measures implemented across the European Union (EU) between 2008 and 2010 (¬217billion compared with ¬200billion)
The richest 1% of people in China, Portugal, and the US have more than doubled their share of national income since 1980, and the situation is getting worse.
Even in more egalitarian countries such as Sweden and Norway, the share of income going to the richest 1% has increased by more than 50%.
It is estimated that $18.5 trillion is held unrecorded and offshore.
In Indonesia, China, India, Pakistan and Nigeria”all lower middle-income countries except for China, which is now classed as upper middle-income”the richest 10% of the population have acquired a much greater share of national income than the poorest 40% over the past 30 years, with the trend set to continue.
According to Credit Suisse, 10% of the global population holds 86% of all the assets in the world, while the poorest 70% (more than 3 billion adults) hold just 3%.

India
Billionaires Rising
India has seen its number of billionaires increase from less than 6 to 61 in the past decade, concentrating approximately $250bn among a few dozen people in a country of 1.2 billion. What is striking is the share of the country’s wealth held by this elite minority, which has skyrocketed from 1.8% in 2003 to 26% in 2008, though it declined in the aftermath of the global financial crisis.
(Note: The above is only a summary of the Oxfam Report which can be accessed at: https://www.oxfam.org/sites/www.oxfam.org/files/bp-working-for-few-political-capture-economic-inequality-200114-en.pdf)