Grandmother who stands in Solidarity with Reading’s Muslim Community

Islamic Voice 0 October, 2019 12:00 am
US ‘War on Terror’ Study Report
An Industrial City for Women in Jeddah
Muslim Scholars and Imams Blast ISIS

A 69-year-old grandmother who stands outside an Islamic Centre in the UK with a sign that says ‘I am your friend, I will watch while you pray’ has been nominated for a Pride of Reading Award. Jean Scott-Barr, from Woodley, has been standing outside the Aisha Masjid and Islamic Centre in Earley every week since the Christchurch mosque shootings on March 15. Her gesture of friendship was seen by people all across Reading and the world when she was photographed with her sign by Dr Saqib A Choudhary on March 22. The sign, which said ‘I am your friend, I will watch while you pray’ was shared on Twitter. Her thoughtful gesture has earned Jean a Pride of Reading Award nomination, in the Smile of the Year category. An anonymous person nominated Jean for the award, saying: “Jean’s display of solidarity, consideration and friendship is very inspiring, and it sends a really strong message out about the importance of standing together in unity in the face of adversity, regardless of faith or background. “I think that Jean is an inspiration to the people of Reading, and to people all over the world.” “I believe she deserves this award, as a thank you from all of those who she continues to motivate with her kind nature, and to maybe encourage others to do more in their community to help one another.” 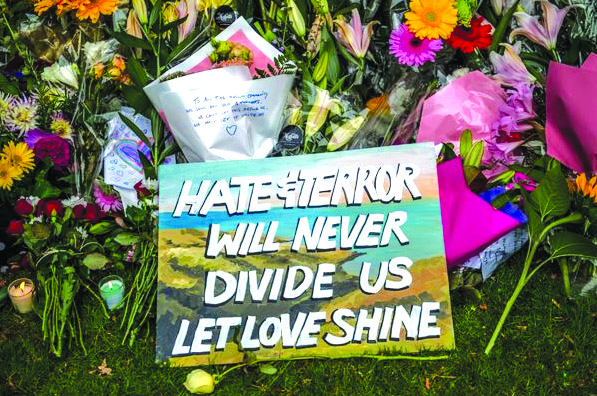 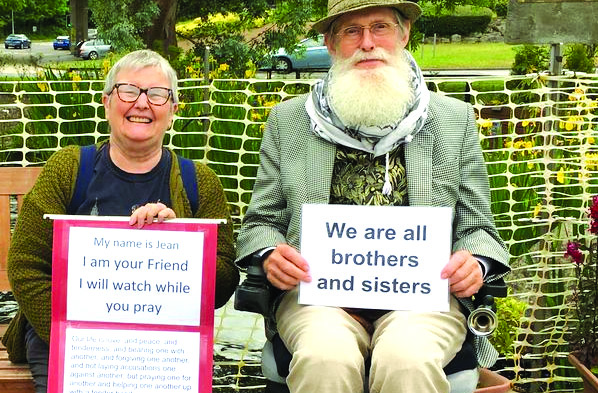 Learning of her nomination, Jean said: “I’m amazed by it, I didn’t ever expect such a thing. However, if it helps to spread the word about the value of such a small action, then I’m very pleased.
“After the Christchurch attacks I saw a photo of Andrew Gray stone who was standing outside a mosque in Manchester with a similar sign.
“I was horrified by the attack and about the way Muslims are being vilified in the media and by politicians, but had felt helpless to do anything about it.”Seeing Andrew, I thought ‘this is something I could do’. “I wanted to show that there are people in this country, and in the world, who do not subscribe to the demonisation of Muslims and Islam.
“I started doing this on my own because I really wanted to get started but my husband, Frank Spence, was unwell for the first couple of weeks. When he was better he came along too and has been present every week since.
“We still go because the friends we have made at the mosque have told us that they regard it as important; a sign of love made visible.”
“We have received such a warm welcome that it has become one of the most enjoyable times of the week”, she says.
The couple say that their experience in a Calais refugee camp back in 2015 gave them an understanding of the problems faced by victimised minorities. Jean explains: “In 2015, we visited the refugee camp at Calais, commonly known as The Jungle, and were so horrified by our experience there that we subsequently spent time volunteering with l’Auberge des Migrants at their warehouse and kitchen in Calais.
“We are too old and infirm for that sort of work now, but we volunteer with Reading Refugee Support Group, including helping refugees and asylum speakers with their English.
“It was that experience of working with refugees and asylum seekers that opened our eyes to the problems experienced by victimised minorities.”
Jean is a Quaker and a member of Reading Quaker Meeting. She said: “One of the things Quakers say is ‘Do what love requires of you’ and ‘Let your lives speak’.”
(Extracted from getreading.co.uk)