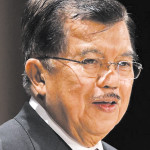 The concept of moderation in Islam, which was introduced in Malaysia is in line with the concept of ‘Islam Nusantara’ in Indonesia, said Indonesia’s Vice-President Jusuf Kalla. He said both concepts had proved that Muslims in both countries rejected any form of extremism and chose to live in a peaceful country. “Indonesia and Malaysia are peaceful nations, there is no radicalism in Islam and we are not failed nations. We have moderate views,” he said. “There are some Muslim groups which are radical and it can happen anywhere, people are afraid, not just people in Europe, but even Muslims are afraid. They resort to bombings such as in Pakistan, Yemen, and Syria,” he said. Jusuf said all Muslims must work together to stop radicalism in Muslim countries. (Extracted from themalaymailonline.com/world)