Integration of Muslims in Germany Moving Ahead 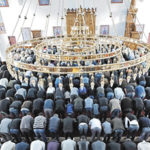 Berlin: The integration of Germany’s more than 4 million Muslims is moving ahead, especially when it comes to employment and language skills, according to a study released recently. The Bertelsmann Foundation said in its Religion Monitor 2017 study that about 60 percent of Muslims who moved to Germany before 2010 now hold a full-time job, while 20 percent work part-time jobs “ similar to ethnic Germans. Muslims also had higher employment rates in Germany than in other western European countries, in part driven by Germany’s strong economy and big demand for workers. However, the study said it’s still harder for very religious Muslims to find jobs in Germany than in Britain. The study said 73 percent of children born in Germany to Muslim immigrants now speak German as a first language.