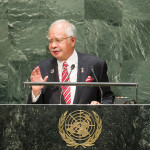 Kuala Lumpur: Denouncing the warped ideology of the so-called ‘Islamic State of Iraq and the Levant’ (ISIL), Prime Minister of Malaysia, Mohd Najib Bin Tun Haji Abdul Razak, urged the United Nations General Assembly to help spread awareness about the true nature of Islam, “which is nothing like that entity”¦that usurps its name.” “We must acknowledge that we are not winning the propaganda war against the so-called Islamic State. Their twisted narrative is not being adequately countered to prevent many misguided people from joining or supporting from afar,” he said. Speaking the truth about Islam is ever-more important, he said, stressing that non-State actors such as ISIL threaten to destroy sovereign States. “It is sickening, and there could be no greater a slur on Islam”a religion of peace, moderation and justice. But these extremists cannot be defeated by traditional military means alone,” he continued. “It is more important than ever that we spread awareness of authentic Islam, most especially when conflicts persist and people lose hope”. (Extracted from http://www.un.org/apps/news/story.asp)