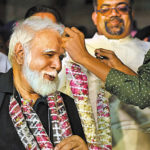 A Pakistani Christian youth garlands the newly-appointed Pakistani Cardinal Joseph Coutts during a welcoming ceremony at Saint Patrick Church in Karachi on July 10, 2018, after his visit to the Vatican. (ASIF HASSAN/AFP)

Karachi: Christians, a tiny minority in Pakistan, have given a warm welcome to the newly appointed Roman Catholic Cardinal Joseph Coutts in the southern port city of Karachi. The 73-year-old former archbishop was among 14 new cardinals appointed by Pope Francis at a ceremony in Vatican City this month. Coutts is the second cardinal from Pakistan after Cardinal Joseph Cordero, who died in 1994. Coutts attended a ceremony at St. Patrick’s Cathedral in Karachi, where he prayed for interfaith harmony, prosperity and peace. Christians make up about 2 percent of Pakistan’s population.