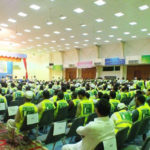 Islamabad: For the first time in the history of Pakistan, transgenders will be part of a team of boy scouts being sent to Saudi Arabia to serve as volunteers during 2018 Haj pilgrimage. “Efforts for sending transgender youth to Saudi Arabia to serve as Khuddamul Hujjaj (volunteers during the annual Haj) are underway,” IPC Sindh Boys Scouts Commissioner Atif Amin Husain was quoted as saying by Pakistan’s Express Tribune. Blue Veins, a transgender welfare organisation, is coordinating with the IPC on the matter, the paper said. “At least two to three transgender persons will be selected from each of the remaining three provinces for joining the scouting community that leaves for Saudi Arabia every year,” Mr Husain said. He said recently 40 transgender youth from Sindh were administered oath on joining the Pakistan Boy Scouts Association (PBSA) a national scouting organisation and one of the largest volunteer forces in the country. The transgender persons would be part of a team of more than 150 boy scouts, he said, adding that last year over a hundred boy scouts had been sent. Mr Husain feels that by joining the PBSA, transgender youth would get social acceptance, attain confidence, feel secure and move forward. Blue Veins Programme Coordinator Qamar Naseem said that after the recruitment of 40 transgenders in Sindh, his organisation is planning recruitment processes in Punjab, Khyber-Pakhtunkhwa and Balochistan.
(www.Siasat.com)