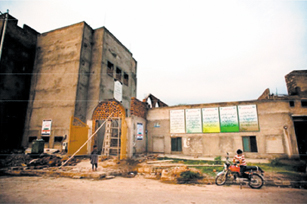 Islamabad: The opening of Pakistan’s first sect-free mosque is such a refreshing change from the religious violence that has been plaguing the country for years now. On the foot of Margalla hills in Islamabad, a businessman, Zahid Iqbal has constructed a mosque. This mosque, called the Darul Iman Jamia Masjid Qurtuba, is spartan in its appearance, but the message it sends is even more powerful. In a time when inter-faith conflict is constantly escalating and Shia Hazaras in particular are subject to ethnic cleansing, this mosque welcomes visitors with a sign that reads,
“This mosque does not discriminate between any sects and welcomes all Muslims.”
However, that is not where the deviation from the norm ends. The mosque also hosts a separate, segregated section for women and contains a library filled with religious books that cater to and contain information on all the different sects.
The completion of the Darul Iman Jamia Masjid Qurtuba is the first of the many steps that must be taken to end religious violence in the country. It is only when the message of love and peace is loud enough that hatred can truly be eradicated from our hearts.
(Source: http://blogs.tribune.com.pk/story)