Religious, Cultural Diversity Must Be Respected By All, says MWL Chief 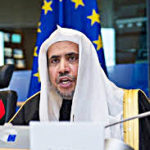 Jeddah: We live in a world that lacks awareness, neutrality, initiative and cooperation, the secretary-general of the Muslim World League (MWL), Mohammed bin Abdul Karim Al-Issa, said when he met with US counter-extremism officials in Washington recently. The answer, he said, lies in the true values of Islam, which call for coexistence, tolerance and peace.  Douglas Padgett, senior policy adviser for countering violent extremism at the US State Department, and other advisers attended the meeting. Al-Issa explained that the MWL is concerned with shedding light on the true values of Islam, which have nothing to do with terrorism or extremism. “The MWL is also on a mission to raise awareness about diversity and differences, promote love and happiness for all, and explain the truth of suspicions surrounding some concepts, whether these were caused by people inside or outside the Islamic world,” he said. “Religious, intellectual, and cultural diversity and differences are universal facts that must be accepted by all,” he added.
(Extracted from arabnews.com)