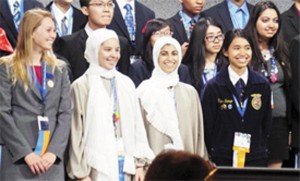 Saudi high school students have recently received eight awards at the annual Intel International Science and Engineering Fair, (Intel ISEF), in Phoenix, Arizona. The Saudi team ranked third globally behind the Canadian and American teams, attaining the same ranking as their Chinese counterparts, according to Arab News.
The Saudi team comprised students from private and public schools in Jeddah, Riyadh and Dammam. Intel ISEF is the world’s largest international pre-college science competition, which allows students to compete and showcase their independent research work to a panel of experts. This year, approximately 1,600 finalists from more than 70 countries competed to win awards and prizes totaling over $ 4 million for their innovative research. From Saudi Arabia, 22 school students participated with 18 different innovative studies and projects in different fields such as engineering, animal sciences, behavior and social science, biochemistry, chemistry, cellular and molecular biology, medicine and health, mathematical science, physics, astronomy and plant science.