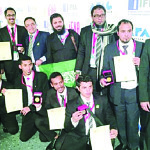 Nuremberg: Saudi inventors have recently won two gold, three silver, and two bronze medals for their brilliant innovations at the International Trade Fair themed “Ideas, Inventions, New Products” (iENA) in Germany between October 30 and November 2, Arab News reported.
The Saudi inventors represented various technical institutions in the Kingdom under the umbrella of the Technical and Vocational Training Corporation (TVTC),. They competed with 700 inventions from 36 countries from across the world. The event was mainly organized by iENA, and it was co-organized with Romania World Organization for Scientific and Technical Excellence, Bosnian Inventors of the Future Organization, Technical College for Creativity and Innovation in Germany, Union of Inventors in Taiwan, World Federation of Unions Inventors, Austrian Organization for Innovation and Invention, and patent representatives from Gulf Council Cooperation.