Europe has tied itself in a single currency but has failed to align its fiscal policies to a central command. It is clearly treading a perilous path. 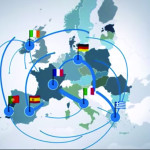 Euro crisis is the failure of Euro which ties 17 European countries in an internet in a flawed manner. For the last three years, Greece, Ireland, Spain, Italy and Portugal have teetered on the brink of collapse threatening to bring down the entire continent and the world with them.

Uniting Europe
For most of its history, Europe has been at war with itself. The countries on war with each other tended to do less business together. Europe was always a continent of trade barriers, tariffs and different currencies. Doing business across borders was difficult. One needed a basket of strange currencies and tariff fees to do business. That stifled the economic growth. Then came the World War II that devastated Europe. Because the situation was so dire, the fascist states began to remove barriers. So the steel mills in one country began to build units in another country. This gave the survivors an idea of a ‘Unified Europe’, a union across the continent. The countries began to remove trade barriers thereby bringing down the cost of business. Last of the barriers to fall was the Berlin Wall.

Maastricht and Euro (¬)
With a united Germany, Europe was ready for business. Twenty seven countries signed the Maastricht Treaty and created the European Union. This made doing business across borders easier. But there was still one major obstacle i.e., different currencies. A decade later they agreed upon one single currency: Euro came into being on January 1, 1999. The countries in the Euro area discontinued their own currencies and their own monetary policies giving rise to European Central Bank (ECB). The Euro area had now one monetary policy. But they still had different fiscal policies.

Monetary Policy vs. Fiscal Policies
The key reason for the current European crisis is a single Monetary Policy vs. Different Fiscal Policies. It is necessary to understand the difference between the two. Monetary Policy controls the money supply, literally, how much money is there in the economy. What is the interest rate for borrowing money? Fiscal policy tells you how much money the government collects by way of taxes and how much it spends. The Government can spend only as much as it collects by taxes. For any spending above that mark, it has to borrow. This is called ‘Deficit Spending’.
Prior to Euro, countries like Greece would borrow money only at high interest rates and had limits over borrowing. But in the Euro era and new Monetary Policy, they could borrow any amount of money. Smaller countries now had access to so much credit that they had never before. Greece and other countries which could borrow credits at 18% were now able to borrow at rates same as Germany i.e., 3%. Germany’s credit card came on par with Greece’s. If Greece could not pay up its borrowings, Germany would step in because now they were bound by a common currency.
With the new abundance of cheap credits, Greece and other countries were able to raise their fiscal spending to previously impossible levels. Some countries went in for huge spending programmes, primarily for politicians to get elected. They made promises of more jobs and generous pensions. And this would be paid by new money they could borrow.
The governments of Greece, Portugal and Italy accumulated huge debts. They were able to repay these debts with more borrowed money. Borrowings and spending resulted in unbalanced fiscal policies. In Ireland and Spain, cheap credit fuelled enormous housing bubbles just as it did in the US around 2008. Credit flowed and debts accumulated and the economies of Europe became tightly intertwined. Companies began setting up offices and factories across Europe, German banks were lending the French companies and French banks lending the Spanish companies and so on and so forth. This made doing business incredibly efficient but at the same time tying together the collective faith of the Euro area.
Things continued this way as long as the credit was available. In fact it was available until 2008. Spurred by the collapse of the US housing market, the credit crisis began to sweep across the globe, bringing borrowing to a halt. Suddenly the Greek economy could not function. They could not borrow money for all the jobs and all the benefits they created. They could not borrow new money to pay up old debts. This was a problem for Greece as well as the countries of Europe as they were part of the new unified monetary policy. Much of Europe had been on a spending spree and borrowed as much money that it could ever repay. But the problem here was some country has to take up the tab. Or else, every country in the Euro area would suffer the consequences. Since the countries that ran up the bill, couldn’t repay, everyone else looked upto Germany.

Austerity Measures
As the biggest and strongest economy in Europe, Germany reluctantly agreed to pay up the debts of the debtor countries. But, only on the condition of debtors implementing the strict austerity measures and assuring that it would never happen again. This meant cutting spending, borrowing less and paying up old debts. It looked like a simple solution. But it was not. Nobody wanted austerity as it meant cutting down Governmental spending. Since the government is the biggest spender in the economy, when it cuts, it cuts the income of many of its citizens. People lose job and they get angry. They riot on the streets. And the austerity doesn’t automatically balance the country’s budgets. You see! The Government collects taxes based on the people’s earnings. When earnings are reduced, the Government collects lesser taxes. This too can’t pay down their debts. The pain is so bad, that it is politically impossible to accomplish.

Cultural Differences
On top of that there are huge cultural differences in the Euro area. Germans are very financially responsible. It had been careful in borrowing and spending and had been very inflation-averse since World War I. Generally, the Germans work hard and expect little of sickness and retirement benefits and meticulously pay all of their taxes. Contrarily, the Greeks expect generous state benefits and don’t pay taxes. Greece has never collected majority of taxes it imposes on its citizens. Joining the Euro has just amplified the problem. The Germans say: “If you want our money, you need our morals too.” As all the countries headed for the fall, the whole continent was in terrible danger. Even though the economies of the problem countries were relatively small, the whole system had huge problem because the economies were interconnected.
The thing to remember is that it was because of the Euro that the countries in debts were able to borrow money from banks and investors. This only made the stronger economies vulnerable. A problem in one country can reverberate across the whole continent triggering a chain reaction. If Greece defaults, the Italy, Spain, Portugal would follow suit and then it would proceed to France and Germany. Pretty soon, it could spread to not just the Europe, but all across the world.

Fiscal Union or Break Up?
Even if the countries are bailed out by Germany now, there is no system to avert its recurrence. It could happen again. This brings us to the fundamental issue of Monetary Policy vs. Fiscal Policy. Alternatively, the Euro area needs a Fiscal Union to match its policy to Monetary Union. That means there should be a political organisation to set up fiscal policy in every Euro area country. It must have the power to cut spending, raise taxes, and offset loss. A fiscal union might actually stop excessive borrowing and spending. However, this is an enormously complicated and unpopular notion. It means surrendering sovereignty to a higher power. In essence, it requires a ‘United States of Europe’. Yet without a central fiscal union, the countries would continue to run deficits, accumulate debts. It will naturally threaten the political stability of Europe.
The big question is: Can the Europe create a fiscal union alongside the monetary union of Europe. Or the monetary union will break up and the Euro will disappear?
(Note: The above piece is transcripted and edited from Commentary by Jonathan Jarvis and Cullen Daly on Youtube. For watching log onto: https://youtu.be/C8xAXJx9WJ8)