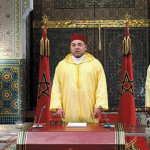 Rabat: King Mohammed VI has stated that more Muslim women scholars should be represented in the country’s major religious bodies. The Superior Council of Ulema is chaired by King Mohammed VI. The Board is composed of the Minister of Islamic Affairs, 30 presidents of the regional councils, the General Secretary and 15 other theologians appointed by the King. Created in 1981, 35 women are in regional councils and one woman in the Supreme Council.
According to the Moroccan constitution, the Council is the sole authority to comment on religious matters and issue fatwas in Morocco.