Australian Church Reaches Out to Muslims

Islamic Voice 0 January, 2017 12:00 am
Al-Azhar Mosque Grand Imam Condemns Terrorism
Muslim US Marine on a Mission of Harmony
50% of Students in Technical Professions are Women Here 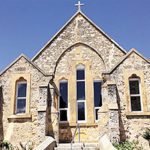 Every Friday, St Paul’s Anglican church in Beaconsfield, just outside Australia’s port city of Fremantle, hosts Muslim prayers in its community hall. Fittingly, the hall was the original church. The enterprise began shortly after Imam Faizel Chothia knocked on the door of Reverend Peter Humphries.
Mr Chothia said he had been trying to find somewhere convenient for Muslim workers to pray in the area, but with little success. “I thought to myself that it would be wonderful to pray in this beautiful church,” he said. “It certainly has the aura of the sanctity associated with prayer, it certainly is a symbol of the divine and it’s the most appropriate place. Peter Humphries said he was delighted by the request and eager to welcome another community to the church. The Christian priest initially offered the main church for prayers for Muslims, which Mr Chothia said was an honour, but added he did not want to inconvenience anyone. They settled on the community hall. Mr Chothia said despite their differences, the two religions had much in common and the Islamic faith held Christian figures such as Jesus and Moses in the highest regard. (To watch a lovely video on this initiative, click on. http://www.sbs.com.au/news/article/2016/11/20/christian-church-hosts-muslim-prayers?#sthash.NswDeDqe.dpuf)