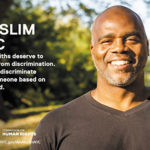 New York: New York City launched a social media advertising campaign to combat negative perceptions of Muslims and counteract increasing instances of threats and violence. Showing an array of photographs of Muslim men and women, the campaign reads “I am Muslim. I am NYC”, according to the New York City Commission on Human Rights.
The campaign is aimed at addressing negative depictions and rhetoric, officials said. Anti-Muslim sentiment has been playing a major role as the U.S. presidential race has heated up. “Now more than ever, it is important for every New Yorker to stand united as one city and reject hate and violence,” Mayor Bill de Blasio said in a statement announcing the ad campaign. “In New York, everyone deserves to be treated with respect. Christian, Muslim, Jewish, Sikh, Hindu, agnostic and atheist “ it doesn’t matter,” he said. “We are all New Yorkers and we all deserve to live safely and free from hatred or discrimination.” Some 3.3 million Muslims live in the United States, and thousands live in New York City, according to the commission. The ads will be placed on Facebook, Twitter and Instagram with the hashtag #IamMuslimNYC.
(Extracted from Huffington Post)