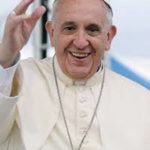 In his message for a campaign promoting peace in Syria, global head of the Catholic Church, Pope Francis referred to world leaders who speak of ending the conflict but at the same time fund the war through the sale of arms. “While the people suffer, incredible quantities of money are being spent to supply weapons to fighters,” he said. He noted that some of the countries supplying the weapons “are also among those that talk of peace. How can you believe in someone who caresses you with the right hand and strikes you with the left hand?” The Pope encouraged people of all ages throughout the world to use the Holy Year of Mercy as an occasion to “overcome indifference and proclaim with strength that peace in Syria is possible! Peace in Syria is possible!” His message accompanied the launch of a new campaign by Catholic charity organization Caritas International, titled “Syria: peace is possible.”