Islamic Voice 0 June, 2016 12:00 am
Wherever You Go, Be the Peace Maker
Pope Francis Disagrees with Identifying Islam as Violent
Reaching Out With Children’s Books 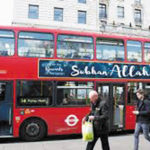 London: London’s iconic red buses and public transport in other British cities will carry banner adverts featuring the Arabic phrase “Subhan Allah” (Glory be to God) in a bid to encourage British Muslims to support Syrian war victims. The posters will appear on hundreds of buses during Ramadan, which begins on June 6 and lasts until July 7, the Daily Mail reported. Islamic Relief, a Muslim charity, is funding the campaign, which will be rolled out in London, Manchester, Birmingham and Bradford. Organizers hope it will present Islam in a positive way and encourage British Muslims to donate to humanitarian efforts for victims of the ongoing war in Syria. “In a sense this could be called a climate change campaign because we want to change the negative climate around international aid and around the Muslim community in this country,” director Islamic Relief, Imran Madden said. “International aid has helped halve the number of people living in extreme poverty in the past 15 years, and British Muslims are an incredibly generous community who give over £100 million to international aid charities in Ramadan,” he added.