Bell Rings in Harmony at Kashmir’s Church  After 50 Years 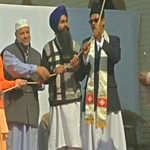 A new bell in Srinagar’s Holy Family Catholic Church is ringing in the spirit of harmony after the previous one went silent half a century ago. The 105 kilogram bell was inaugurated last month at a short ceremony in the church located on Srinagar’s M.A. Road by representatives of Muslims, Hindus, Christians and Sikhs. The Parish priest Father Roy Matthews officiated. “It is a joyous moment for all of us. Kashmir has a rich composite culture and harmonious coexistence is the very essence of Kashmiriyat. So I see this against that background, with representatives of various religions joining us in our happiness. At the same time, we want to send out a message at the national, international and local levels that we are one here and we love and accept each other as we are,” said Father Matthews.  Representatives of several religions were present, “to jointly ring the new bell for the first time in the past 50 years,” said church committee spokesman, S.M. Rath. The British-era church, built in 1896, had lost its original bell in a fire sparked by “an arson incident” on June 7, 1967. The bell, the largest of its kind in the State, was a gift from a Kashmiri Christian family. Kashmir hosts a small Christian population, and has three main churches in Srinagar and Baramulla. The Christian population, as per the 2011 census, is 0.28% in the State. Around 30 Catholic families live in the Valley.  The new bell is made of cast iron and was installed by local carpenters and labourers, aided by those from outside. As the bell rope was pulled by the representatives jointly, a group of children from different religious backgrounds sang in chorus.
(Extracted from thehindu.com)