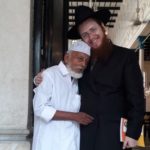 By Shamayita Chakraborty
Mohammed Khaleel Khan, an old Muslim man clad in a pristine white skull cap, shirt and lungi, has been working as the caretaker of Beth El Synagogue in Kolkata for 58 years. His father, Muharram Khan, who came from Odisha, also served as the caretaker and now, Khaleel’s sons, Shiraz and Anwar, work in the same profession. “We are serving in a religious place and we are very happy about it. While I work in Beth El, my brother, Anwar, is in Maghen David,” said Shiraz. Besides these three-generation-long caretakers, there is Sheikh Wasim, another caretaker, whose father, Sheikh Naseer, also served at the Beth El Synagogue for 60 years. “Some people questioned why we should be working in a synagogue. My answer is simple. I am working in a religious place. Name him Allah or Vishnu “ there is no discrimination in God’s land. The work I do here is far better than working in a pub where they serve alcohol,” said Wasim. Talking about the Muslim caretakers, Ian Zachariah asked, “What’s so surprising? We’ve never had any problems. They don’t have any problems either. This is how it should be everywhere.”
(From timesofindia.indiatimes.com/city/kolkatta)