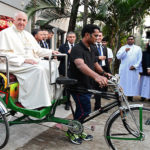 On his recent visit to Bangladesh, Pope Francis, head of the Catholic Church, greeted and blessed a group of Rohingya Muslim refugees who fled to Bangladesh from neighboring Myanmar. The moving meeting took place during an Interreligious and Ecumenical Meeting for Peace in the garden of the Archbishop of Dhaka’s residence. The 16 Rohingyas traveled to Dhaka from Cox’s Bazar, the district bordering Myanmar where refugee camps are overflowing with more than 620,000 Rohingyas, who have fled violence in Myanmar. One by one, each one of the refugees approached the Pope at the end of the event and through the aid of an interpreter told him their stories and their experiences. The Pope listened to the stories, and held the hands of the Rohingya survivors of the persecution “ 12 men, two women and two young girls “ vowing: “We won’t close our hearts or look away. The presence of God today is also called Rohingya.”