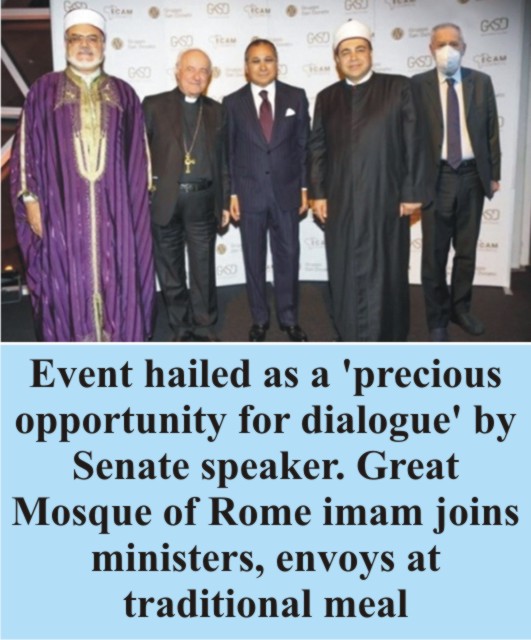 ROME: Representatives of the three main monotheistic religions in Italy along with the Speaker of the Italian Senate, the interior minister, and ambassadors of several Islamic countries, took part in an iftar meal in Milan.

The event was described as a “meaningful and precious opportunity for dialogue, mutual understanding, and peace” by the Speaker of the Upper Chamber of the Italian Parliament, Elisabetta Alberti Casellati, in her keynote speech on the traditional Ramadan meal.

Archbishop Vincenzo Paglia, president of the Vatican Academy for Life; Riccardo Di Segni, chief rabbi of the Jewish Community of Rome; Nader Akkad, imam of the Islamic Cultural Center of Italy Great Mosque of Rome; and Badri Madani, imam of the Palermo Mosque held an interreligious moment of prayer.

“All our religions have a single matrix and are at the service of the brotherhood in the world,” Paglia said as he quoted parts of the “All Brothers” encyclical letter Pope Francis wrote in 2020.\

Interior Minister Luciana Lamorgese praised the “presence in Italy of the Islamic community.”

Health Minister Roberto Speranza and Speaker of the Parliamentary Assembly of the Mediterranean Gennaro Migliore also attended the event organized by Kamel Ghribi, a Tunisian financier and president of the European Corporate Council on Africa and the Middle East. (https://arab.news/cmhkj)