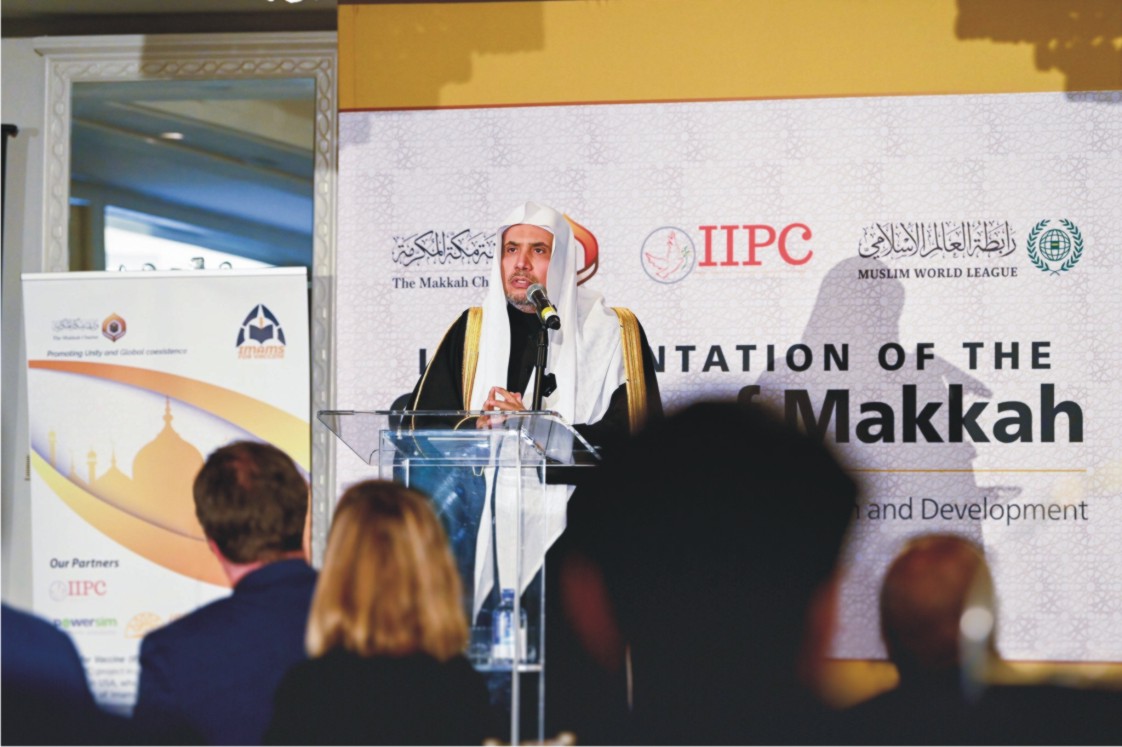 CAIRO: Washington DC hosted the first forum on Makkah Al-Mukarramah Charter to promote the concept of one human family with its common values.
With the participation of US administration officials, religious leaders, heads of research centers, and a number of academics, five workshops discussed cooperation of followers of religions, minority communities, and the role of religious response in times of crisis
Four global programs were announced based on Declaration principles and derived their activities from areas of international interest.
Makkah Al-Mukarramah Charter is the first Islamic consensus of its kind that expresses the word of Islamic Sharia scholars on important contemporary issues.
Washington, DC, hosted the “Makkah Al-Mukarramah Charter to Promote Global Unity and Coexistence: Interfaith Cooperation for Security, Health and Development” Forum, jointly organized by major Islamic and non-Islamic religious institutions from various US states, with the participation of His Excellency Secretary-General of the Muslim World League (MWL), Chairman of the Association of Muslim Scholars, Sheikh Dr. Muhammad bin Abdulkarim Al-Issa, Executive Director of the White House Office of Faith-Based Partnerships and Neighborhood, Mrs. Melissa Rogers, a host of political and intellectual leaders, heads and members of think-tank and research centers, and a number of various religious and academic leaders.
The principles of the Makkah Al-Mukarramah Charter and the sustainable development goals converge on the fundamental issues of justice, poverty, environmental damage, mitigating violence, promoting peace and coexistence, and other fundamental issues around the globe.
In the opening session, His Excellency Dr. Al-Issa, reviewed the contents of the Makkah Al-Mukarramah Charter, explaining that it is an extension of Al-Madinah Document or the Constitution of Madinah, which Prophet Mohammad, peace and blessings be upon him, drew up with the various components of society in Al-Madinah. His Excellency affirmed that Al- Madinah Charter was the truest expression of the values of Islamic tolerance, including the call for coexistence with full rights and duties while emphasizing human dignity and the right to exist in full legitimate freedom “whatever their religion, culture or race”, and that there is nothing to support the beautiful meaning of freedom such as what is supported by constitutional principles from which national laws are derived, that everyone is obliged to respect so that freedom does not turn into chaos, and then they do not find excuses to escape from the law under false pretexts that violate the law and the values of the national community, which in reality represent its national values derived from its constitution and common moral history.
His Excellency pointed out that the Makkah Al-Mukarramah Charter emphasizes the importance of respecting diversity in all its spectrum. In its true meaning, this represents respect for the will of the Creator to the existence of difference, diversity, and pluralism among human beings. He added that the Declaration calls for dialogue and an alliance of civilizations, not paying attention to the theory of conflict and clash of civilizations, stressing the importance of a deep understanding of philosophical theories on this subject so as not to rush and misunderstand their holders.
He noted that the message of the Makkah Al-Mukarramah Charter has begun to take root in the Islamic consciousness, referring to the meeting of foreign ministers of Islamic countries in Niamey, Republic of Niger, in November 2020, during which the Makkah Al-Mukarramah Charter was presented for discussion. Then the ministers, on behalf of their countries, unanimously announced in their final statements the adoption of the Makkah Al-Mukarramah Charter to be used by religious, cultural and educational institutions in Muslim countries as a reference expressing the religious identity of the Islamic nation. It was signed by more than 1,200 muftis and scholars representing 27 sects. They came from 139 countries to meet and agree on this historic achievement next to Al-Kaaba in the month of Ramadan in 2019, expressing the word of the religious scholars of the Islamic nation on the most prominent contemporary issues.
Sheikh Al-Issa continued: “The Makkah Al-Mukarramah Charter is an extension of Al-Madinah Charter, which established the values of religious tolerance and human fraternity, stressing that it is the first Islamic consensus of its kind that expressed the word of Islamic Sharia scholars on important contemporary issues, and that the presence of this diversity in their various sects to make this unitary historical achievement did not happen before throughout Islamic history.”
He added, “The issuance of the Makkah Declaration with the signature of all Islamic sects confirms the level of great and exceptional impact of the Declaration, and this reflected the decision of the Islamic countries in the aforementioned Niamey meeting.
His Excellency wrapped up emphasizing that today’s world does not lack international initiatives, speeches and decisions, but rather activating them to be a tangible reality and sustainable action in what requires sustainability. Therefore, the Makkah Al-Mukarramah Charter focused on practical programs and partnerships inside and outside the Islamic world.
His Excellency said: “This day, for example, has witnessed in its presentation, the announcement of the implementation of four global programs, based on the principles of the Makkah Al-Mukarramah Charter; Religious diplomacy with its common values with followers of different religions, youth engagement, women’s legitimate empowerment and capacity building, which will derive their activities from areas of humanitarian, social and economic interest at the international level.
Subsequently, the speeches by the participants, including politicians and prominent religious leaders of all religions of various Christian denominations “Evangelical, Catholic and Mormons,” as well as independent Jewish religious leaders, followed. The Forum also saw the speeches by Islamic religious leaders from all states, with prominent names of think tanks in Washington, DC, and academic leaders from Washington, DC, and some states. Everyone viewed that launching the Form from the United States and the warm welcome it received confirmation that the Makkah Al-Mukarramah Charter is a global humanitarian declaration.
(https://www.egypttoday.com/Article/1/109795/Washington-hosts-1st-forum-on-Makkah-Al-Mukarramah-Charter-to)