Islamic Voice 0 August, 2019 12:00 am
Interview
No Discrimination against Sunnis in Iran’
Education: ‘Modern’ and ‘Religious’

Nourdeen Wildeman is a Dutch convert.
He converted to Islam “officially” on December 9, 2007. Despite his recent conversion, he managed to launch his ongoing project
“Find the Mosque that Fits You Best.”
In this interview, Nourdeen talks not only about his project’s experience, which gives useful information on Dutch mosques, but also about his daily challenges and opportunities as a Dutch Muslim convert, as well as a positive role model for European Muslim youth.

Q: Would you please tell us more about your project?
Wildeman: It is an e-project aiming to profile all mosques in the Netherlands. Through this project, any Muslim can know all about the mosques there with full information about each mosque. Each mosque’s profile features its ethnic background, address, postal code, telephone number, email address, picture of the mosque, overhead organization, language of the Friday sermon Khutbah, bookstore, mosque’s capacity for males and females, availability of bathrooms and place for ablution (wudu) both for men or women, and finally some general remarks (like, old building, no parking, specia 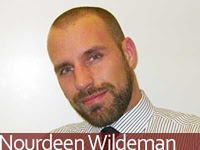