Islamic Voice 0 October, 2012 12:00 am
Anna sounds vague on Muslim issues
Education: ‘Modern’ and ‘Religious’
“Islamophobia can be Countered with Positive Message of Islam”

The Karnataka Wakf Board had been in the news with a lot of allegations flung against it by the Chairman of the Karnataka Minority Commission. It is one year since intrepid advocateMr. Abdul Reyaz Khan has been  heading the Board as chairman. He recently spoke to Maqbool Ahmed Siraj on the affairs within the Board and the charges being heard in the media. Excerpts:

Karnataka Wakf Board has identified 150 properties for commercial development and the Islamic Development Bank has shown interest in investment.

Q: The Karnataka Wakf Board has been facing an onslaught of allegation from the Karnataka Minorities Commission? How factual are the charges of massive corruption in the Board and about encroachment of properties? Why this rivalry between these two bodies dedicated for the welfare of the Muslims and the minorities in the State?

A: Under section 10G of the Minorities Commission Act, the Commission has got the power  to summon the people against whom the allegation have been made and get the clarification before they take a decision. But  the situation is that the whole Commission has not been constituted yet. Chairman as an individual has no executive  power. But he is inspecting institutions like the CBI squads without any authority. Till this date he has not called for clarification of allegations, if any against the Board. Overnight he has prepared a 7,000 page report about wakf property and made it public. It is vague and baseless. The Minority Commission chairman is trying to malign the reputation of all the Muslim politician and bureaucrats for his own selfish aims. He has submitted the report to the Lok Ayukta. Once the report is presented to the Lok Ayukta, the Commission should have no role to play. But he goes on  giving publicity. He stoops to very low level. We have recently given training to Wakf Board employees to classify the lakhs of files of wakf  properties into period wise, district wise and category wise. But the Minority Commission Chairman took photographs of some files being shifted in the process and publicized them in proof of his charges against Board’s callousness.

Q: What does the survey speak about the status of the wakf assets in the State?

A: The Wakf Survey of its assets and properties has been  completed to the extent of 80% so far. The State has 29,000 waqf institutions. The total land under these properties is 114,944 acres. Under the inam abolition 46,000 acres were lost. Another 10,888 acres were lost under Land Reform Act. Under compulsory land acquisition, 912 acres were acquired. Another 169 acres has come under lienation. The Government and its institutions themselves have encroached up to 10,000 acres while the private individuals have encroached upon 5,077 acres.

A: We recently came to know that Haryana Wakf Board has set up an engineering college. We have been running ITIs in various districts. We will think of setting up such vocational training institutes. 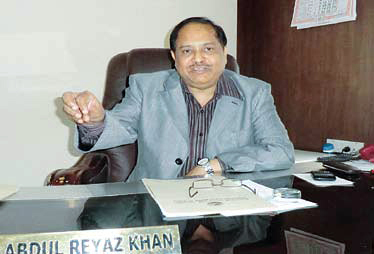 Elections to Muslim Orphanage will be conducted within two months.

Q: The 120-year old Muslim Orphanage has seen four administrators during the last 19 months since the takeover by the Board. Number of inmates in the institution has drastically come down. Outsiders’ interference has  grown and school result has nosedived due to inefficient government teachers. Its ITI is unable to fill its seats. When do you propose to conduct elections?

A: We have recently appointed a Wakf Board member as the Administrator. I have paid visits and will look into the affairs. Elections would be conducted in two months. Q: Where does the case regarding Windsor Manor Hotel stand now? How could the Shia waqf property get adequate rent from the Welcom Group of Hotels? A: The previous boards extended the lease in three installments
to a total of 90 years. Under the 1995 Central Amended Wakf Act, all leases on wakf properties above three years are automatically rendered null and void. They were paying a paltry rent of Rs. 5,000 per month on a premises on the prime land of 136,000 feet. An interim ruling by the High Court had enhanced the amount to Rs. 6 lakh per month. Now the Division Bench of the Karnataka High Court has referred the matter to a Mediation Centre under Justice Ravindran. The Board is pleading that the Hotel Management should  rather share profit.

Q: Any new scheme on the anvil from the Karnataka Board of Wakfs?

A: Recently the CEO and  chairmen of all wakf boards met in Delhi. The meeting was attended by Islamic Development Bank chairman Dr. Ahmed Muhammad Ali which has shown inclination to invest in commercial development of wakf properties  in India. We have identified 150 such properties in Karantaka which can together generate an income of Rs. 50 lakh to Rs. 2 crore. The scheme has been conceived in a way that 65% of the generated revenue would go for repayment and 30% will be spent for maintenance. On full repayment, the entire income will be used for maintenance and scholarships.

Q: Any new projects in Karnataka?

A: Recently two shopping complexes were completed in Belgaum and they have  started yielding revenue of Rs. 5 lakhs. In Kudichi in Belgaum district a piece of land leased out for sugarcane production yields revenue of Rs. 40 lakh annually.