I think of him as a large-hearted, grand-fatherly, local figure forever worrying about the education of young Muslim girls…

By Vrijendra
In the late evening of June 8, 2019, Firoz Ashraf died in a freak accident outside his home in Jogeshwari when he was crossing the road. It is more than a month since he died, and many memorial meetings have been held to mourn his death, to celebrate his life, to remember him and to try to find out who will and how would fit in the large void he has left behind in so many, especially, young lives of so many Muslim girls for whom he was, to use an old but apt clichÃ©, a saviour! In the last one month, I have also thought about him more than ever.
First, I think of him as a large-hearted, grand-fatherly, local figure forever worrying about the education of young Muslim girls he had been deeply involved with for decades. His concerns about them were all practical: which school they should go to, who would teach them, what to teach them, what they would eat, how to pay their school, college fees, how to fight with, argue with, persuade, whatever, their parents to send these girls to school, to not burden them with too much house work, to let them dream their modest and not-so-modest dreams! And they were always there in his modest house in Abba Apartments. I would constantly tease him: Are you running a dharamshala? He would laugh good- naturedly and tell me: kya kare, yaar. Inko kon dekhega? And then he would tell me the life-story of the girl in the house.
I found it remarkable that his concern for the poor Muslim girls never faded with time. Instead, it intensified as he became more well-known, as more girls and families sought him, as ex-students told others about him, visited him to help and to seek help for others. It was as if there was a whole community of these young girls from poor Muslim families for whom life had a marker: before they met ‘uncle’ and after. It is impossible to describe the easy and intense emotional connect he had with these girls. Firoz, in his seventies, was their friend, confidant, advisor, father-figure who could fight with the real father and much more: everything, as so many tearfully recalled in memorial meetings. Many of them broke down and wondered what they would do now that the uncle was no longer there.
But for him, I would have never known about these lives. But for him, many of these young Muslim girls would not have known any other life but what they were born into. He was an activist all his life but he was not a ‘big’ activist. He did what he could. He did not carry the burden of the world on his shoulders. He wore it lightly. In the process, he did not worry too much about where the help came from as long as it came. It was, then, not a surprise that his biggest grouse was against progressive, affluent leaders of the Muslim community. Normally, Firoz was fun, full of laughter and stories but his passionate fury was roused as soon as the subject of big Muslim leaders and activists came up. He held them “ at least, partly – responsible for the sorry plight of the community. He would lament that they did nothing; cared for nothing; full of themselves, they only talked big, he would say. And he knew. He had experienced their callousness and pomposity often.
Before the riots of 1992-93, in the aftermath of the demolition of Babri Masjid in UP, Firoz was a different man: a progressive, left intellectual, trade unionist and activist, he lived in a cosmopolitan society in Malad, largely among Hindus. The riots forced him to shift to Jogeshwari, among his religious community. But Firoz did not regret the decision. Sometimes, he would suggest that he regretted that he got to know the Muslim community so late.
Firoz was not just an activist. He was also a life-long journalist, writing regularly and copiously. You got to see this Firoz if you entered his sanctuary: a room of his own.(Those who know him knew that adjacent to his house in Jogeshwari, he had another room. The distance between these two houses is about 15 feet. But for Firoz, it was a world apart. When one walked with him from one place to another, Firoz would swiftly, easily change). Here, he would talk about what he was writing, literature, history, books and magazines. He would tell you stories about the state of Urdu and Hindi newspapers and journalists.
I had talked to him just a couple of days before his untimely death, when he called me up because my wife and I had failed to show up at his place for our Eid lunch! This time, somehow, he had forgotten to invite us! As usual, he was candid about how, sometimes these days, his memory failed him. I promised to visit him soon. Little did I know that this would be my last conversation with him! (Of course, I am at an age when one never knows which conversation with whom is the last one.) In any case, Eid lunch without him would never be the same again. 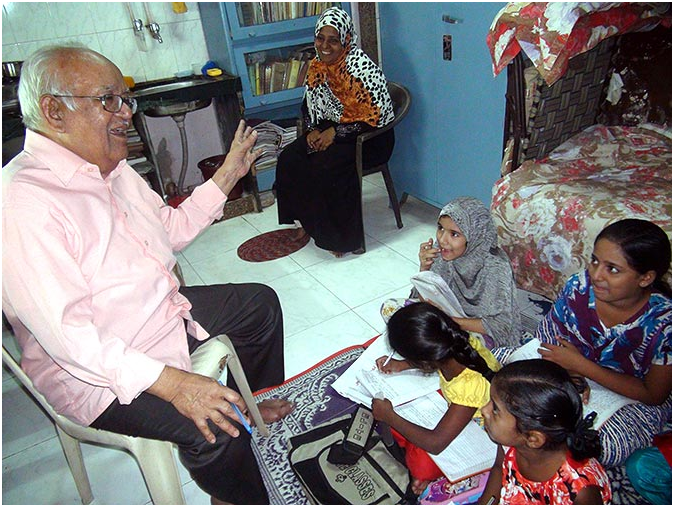