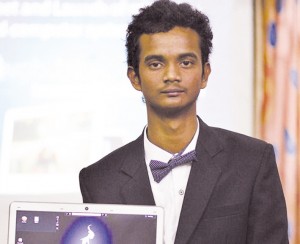 Guwahati: Presenting a role model to young Muslims, Afreed Islam, a school boy has designed a virus-protected microchip-run computer system.
“Most computing devices use mechanical hard disk drives, flash memories and electronic disks to boot up operating systems,” Afreed Islam, told The Times of India on February 18. “My invention replaces both mechanical and electronic hard disks with a microchip, doubling speed and storage capacity,” he added. Islam, a Class X student from Guwahati’s Little Flower School, launched his new invention, the ReVo Book, an ultra-slim computer system designed by him last fortnight. The ReVo Book is embedded with a microchip and a hybrid operating system, also invented by Islam, named ReVo IX.
He claimed that the new operating system features faster execution speed, an inbuilt firewall and stands as a complete independent operating system.
The system can be used in places demanding high uninterrupted performances such as offices, banks, academic institutions, and industries besides domestic computing purposes. It can also be installed in servers by large set-ups. The young boy hopes to promote the ReVo Book, which will, according to him dominate comparable products in the computer market. “Minimum power is required to run the ReVo BOOK and its portable size is a bonus,” he said. Siddharth Deb Nath, a scientist at Assam Science Technology and Environment Council, said that Islam’s invention fulfilled all basic eligibility criteria for submission of a patent application.
(www.islamonline.net)