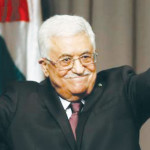 New York: Palestinian leader Mahmoud Abbas has said that he will demand an international resolution that would set a timetable for ending Israeli occupation of Palestinian territories when he speaks to the UN General Assembly. If the UN rejects his appeal, Abbas said he will seek membership in international institutions and agencies. His aides have said that would include the International Criminal Court. Joining the court could potentially open the door to war crimes charges against Israel, both for its military actions in Gaza and for ongoing construction of Jewish settlements on occupied lands. Abbas spoke at a lecture at Cooper Union college. The recent Gaza war has weakened Abbas domestically, with Hamas enjoying a surge of popularity among Palestinians for fighting Israel. He is under pressure at home to come up with a new political strategy after his repeated, but failed attempts to establish a Palestinian state through US-mediated negotiations with Israel.
Abbas would ask the UN Security Council to issue a binding resolution, with a specific date for ending Israel’s occupation of the West Bank, Gaza Strip and east Jerusalem. Captured by Israel in 1967, the territories were recognized by the UN General Assembly in 2012 as making up a state of Palestine.