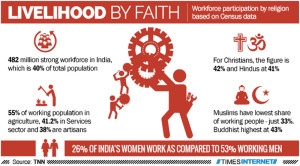 New Delhi: Muslims have the lowest share of working people – about 33% – among all religious communities in India. This is lower than the nationwide average work participation rate of 40%.
The figure for Jains and Sikhs stands at 36% each. Buddhists, comprising mostly Dalits who embraced Buddhism in the 20th century, have a high working population share at 43%. For Hindus, the figure is 41%. Drawn from the Census 2011 data, the statistics show a faith-based profile of India’s 482 million strong work force. The figures have not changed much from the 2001 Census, indicating a stasis in the economic status of communities.
The key reason behind low work participation rates in some communities seems to be the low work participation of women. Women’s participation is just 15% for Muslims and Sikhs, and even lower at 12% among Jains. Among Hindus, there are 27% working women, while it is 31% for Christians and 33% for Buddhists. Several smaller faiths fall under ‘Other Religions’. These are mostly tribal communities from peninsular India and the northeastern states. Their work participation rates are markedly different from other communities. Nearly 48% of members of this section work, more than any of the country’s six major religious communities. Women’s work participation is also highest in tribal communities, at nearly 44%.
The Census data also provides a picture of how many are engaged in what kind of work. For the country, 55% of workforce is in agriculture, as cultivators or as agricultural workers. The Census classifies all occupations in industry and services as ‘Other’, a convention since British times. This makes up 41% of all workers. Only 13% of Jains are involved in agriculture, the lowest for any community. While 41% of Muslims and Christians work in agriculture, this goes up to 47% among Sikhs and to 54% for Buddhists. The highest share of workers involved in agriculture is among Hindus, at 57%. The Jain community is predominantly working in industry and services. Muslims too are largely concentrated in these sectors as are Christians. Muslims are also notably more involved in the `Household Industry’ category which is mainly artisanal work like carpentry, etc.
Among tribal communities classified under ‘Other Religions’, over 80% of their members are working in agriculture, indicating their poor economic status.
(Subodh Varma | TNN)