Islamic Voice 0 August, 2017 12:00 am
123 Waqf Properties to return to Delhi Waqf Board
Whither Black Money?
Shape of Things to Come 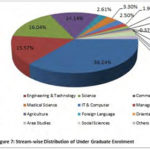 India has made great strides in higher education in the last one decade. The stated purpose of higher education is economic growth. Any course in education, skill or training attained after 12 years of schooling is included in ‘Higher Education’. The University of Human Resource Development has recently released the All India Survey of Higher Education (AISHE) which provides the facts and figures about the state of education in colleges and universities. The survey was completed in 2016 and covers the progress between 2011 and 2016. We provide the highlights of the survey.
There are 799 Universities in the country, 39,071 colleges and 11,923 stand alone Institutions listed on AISHE web portal and out of them 754 Universities, 33,903 colleges and 7,154 stand alone Institutions have responded during the survey. 268 Universities are affiliating i.e. having Colleges.
277 Universities are privately managed, while 307 Universities are located in rural areas. 14 Universities are exclusively for women, of which four are in Rajasthan and two in Tamil Nadu.
There are 459 General, 101 Technical, 64 Agriculture and Allied, 50 Medical, 20 Law, 11 Sanskrit and 7 Language Universities (i.e., dedicated to Telugu, Kannada, Urdu etc.)
The top 8 States in terms of highest number of colleges in India are Uttar Pradesh (UP), Maharashtra, Karnataka, Rajasthan, Andhra Pradesh (AP), Telangana, Tamil Nadu and Madhya Pradesh (MP).
Bangalore district has the highest number, i.e., 970 colleges in the country. It is followed by Jaipur with 616 colleges, Hyderabad with 499, Nagpur 445, Rangareddy with 438. Top 50 districts have about 34% of colleges.

College Density: Telengana tops among the states in terms of college density, i.e. the number of colleges per lakh eligible population (population in the age-group 18-23 years). It has 60 colleges for each lakh of eligible population whereas this ratio dips to 7 for Bihar. All India average is 28. Karnataka comes third with 45, Maharashtra second with 43 per one lakh population, Rajasthan 4th with 35.
Rural vs. Urban: 60% Colleges are located in Rural Areas. 11.1% Colleges are exclusively for Women. Only 1.7% Colleges run Ph.D. programme and 33% Colleges run Post Graduate Level programmes.

Boys vs. Girls: Total enrolment in higher education has been estimated to be 34.6 million with 18.6 million boys and 16 million girls. Girls constitute 46.2% of the total enrolment.

Disciplines: A contrast could be seen in choice of discipline at undergraduate level and research. While 40% students are enrolled for BA (humanities), 16% for Sciences, at the Ph.D level, maximum number of students are enrolled in Science subjects (percentage has not been specified by the Survey).

Pupil vs. Teachers: Pupil Teacher Ratio (PTR) in Universities and Colleges is 21 if regular enrolment is considered.

Muslims: Among Minority category, data on Muslims have been collected separately. According to the response received during the survey, 4.67% students belong to Muslim Minority and 1.97% are from other Minority Community. Muslim Minority has more male students than females where as other Minority has more females than males.
Polytechnics: There is total number of 3,867 Polytechnics in India listed on AISHE portal and out of them 2,690 reported the data during the survey. The highest number of Polytechnics is in Maharashtra which is 1,091. 83% of polytechnic students are males and 17% females.
But this trend gets reversed in Nursing and Teacher’ Training (B.Ed) institutions. The total number of Nursing Institutions listed on AISHE portal is 3,060 and out of them only 1,917 responded, 62.65% response rate. The total enrolment in nursing course is 2.3 lakh out of them approximately 87% are female students and 13% are male.

B.Ed: The total number of Teacher’s Training institutions as listed on AISHE portal are 4,403 and out of them only 3,082 responded, which makes the response rate of 70%.The total number of students enrolled in teacher’s training course is 2.18 lakh at all India level. Out of them approx. 37% are male and 63% are female students.