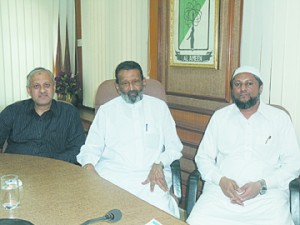 By A Staff Writer
Bangalore: The 10-day tour by the educational delegation led by Dr. Mumtaz Ahmed Khan in the rural parts of West Bengal has fired the imagination of the community.
In a chat with Islamic Voice, Dr. Mumtaz Ahmed Khan, founder of the Al-Ameen Educational Society, said the visit by the delegation had boosted the morale of the community and created awareness about modern education, the lack of which had led to extreme backwardness among Muslims who constitute 24% of the State’s population. He said the 34-year reign of the Marxist rule in the State had pushed the Muslims into abject poverty.
Dr. Mumtaz said he advised the community members to concentrate on setting up primary and secondary schools on a priority basis rather than thinking of medical or engineering colleges. He also told them to muster their own resources to start schools instead of looking towards official help. He informed that a core group had been set up under the leadership of Mushtaque Hussain, managing director of Pataka Beedi. The groups would soon be visiting Bangalore and other parts of Karnataka and South Indian states to review the educational progress of Muslim community in these areas.
The delegation members addressed an educational conference in Kolkata on December 2, 2012. The delegation thereafter visited the Muslim institutions in Islampur, Domkal, Jalangi, Dhani Rampur, Behrampore, Barolpara, Harihar Para, Amtalla, Baildanga, Pancharam, Sheraloor, Kalikundi, Mahalandi, Lalbagh, Lalgola, Raghunathganj, Umarpur, Dhaliyan,  and several other places in the district of 24 Praganas North and South districts.
The caravan included J. Shafiulla, Jt. Secretary, Al-Ameen Educational Society and Zameer Pasha (IAS retd). They visited and interacted with Haroon Rasheed of Al-Falah Mission, Behrampore; Nasir Ahmed of M. M. Foundation; Md. Suleman Khursheed of Muslim Institute, Kolkata; Gulam Mohammad, Hony Secretary, IDB, West Bengal; Prof. Shamsuz Zaman, Principal, Jaisaganj College; Sheikh Abdus Subki, Al-Falah Mission, Dhanirampur; Abdur Rasheed Sarkar, Dhuliyan; Sheikh Alauddin of Jangipur; Shahnawaz Alam, Malda; Noorjahan Shakeel, President of the All Bengal Muslim Women’s Association; Abdur Razaq, Zakir Memorial Society, Kolkata. Amanat Welfare Foundation organised the tour schedule and made arrangements for the caravan.
Ahmed Hassan Imran, Editor, Daily Kolam and Mr. Mushtaque Hussain were conferred the Mumtaz Ahmed Khan Award at the educational conference held at Kolkata.
Dr. Mumtaz recalled his old association with West Bengal and said the Al-Ameen Education Society had donated a sum of Rs. 9 lakh for the construction of the building of Al-Ameen Degree College for Women nearly 25 years ago. It is the only degree college managed by Muslims in the city of Kolkata whose 18% population consists of Muslims.
Dr. Mumtaz Ahmed Khan assured the various delegations which called upon them of moral, material and logistical support from Al-Ameen Society in Bangalore. He hoped that within 10 to 15 years, if the tempo of the current awakening is maintained, there will be a mass movement for education among the State’s Muslims.