AMU to set up English medium Schools in UP 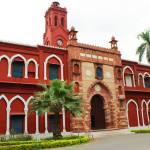 Aligarh: Aligarh Muslim University (AMU) is in the process of setting up English medium schools on the lines of Christian missionary schools in every district of Uttar Pradesh. The AMU vice “chancellor claimed that these schools will be secular, where students from all religions can study, but there will be some reservation for Muslims. The first such school will begin functioning from August 2015, at Jaula village in Muzaffarnagar district, which had witnessed communal riots in 2013. The schools will be recognised by the Central Board of Secondary Education and will be managed by the 129-year-old organization, All India Muslim Educational Foundation, patronised by AMU. “We have decided to set up one school in every district. These will be on pattern of schools run by Christian missionaries. I felt the need for such schools after my three-year experience as the vice-chancellor,” AMU V-C Zameeruddin Shah said. “There is no point in opening engineering colleges and other higher institutions till our students are competent enough to earn their admissions in these institutions. We have to empower our students and equip them so that they can get admissions in higher institutions,” Shah added. “In Muzaffarnagar, the land where the school has come up was donated. We have received proposals from several districts where people want to set up schools under our guidance”. said Shah.