Jallianwala Bagh: The Archbishop of Canterbury Reverend Justin Welby says he had a deeply humbling experience at Jallianwala Bagh, the site of British colonial era massacre. The spiritual head of the Church of England visited Jallianwala Bagh in Punjab on September 10 and said the time at the site provoked “feelings of profound shame.” The massacre took place at Jallianwala Bagh in Amritsar during the Baisakhi festival on April 13, 1919, when the British Indian Army under the command of Colonel Reginald Dyer opened fire at a crowd staging a pro-independence demonstration. At least 400 people, including 41 children, were killed and more than 1,000 wounded in the firing.
In the presence of a sizable gathering inside the Jallianwala Bagh, the Canterbury archbishop, who was on 10-day tour of India, read out a prayer seeking God’s forgiveness for the heinous act. The most senior bishop in the Church of England, prostrated himself to pray in front of a memorial to the Jallianwala martyrs. Asked if he would ask British government to seek apology for the Jallianwala Bagh massacre, the archbishop said, “I think I have been very clear about what I feel and that will be broadcast in England.” Terming the massacre misuse of power, the archbishop said, “I came in seeking the sorrow and repentance suffered at the hands of British soldiers”. “I am personally very sorry for this terrible atrocity,” the archbishop said. “I recognize the sins of my British colonial history, the ideology that has too often subjugated and dehumanized other races and cultures,” he said. “Coming here arouses a sense of profound shame at what happened in this place. It is one of a number of deep stains on British history. The pain and grief that has transcended the generations since must never be dismissed or denied,” the archbishop added. He continued, saying that Christ called us “to turn away from sin not just repenting old ways but to live in a new way that sought the kingdom of God.”
Later, Welby went to the Golden Temple where he paid obeisance at the sanctum sanctorum. He also went to the Akal Takht, the supreme seat of Sikhs.
The archbishop arrived at the headquarters of the Church of North India’s Amritsar diocese on September 9. The visit marked the last leg of his 10-day pilgrimage to the Indian subcontinent, which has seen him visit churches and cathedrals around the country and meet with Hindu, Muslim, Sikh and Jain leaders to discuss the need to combat growing religious intolerance and violence. 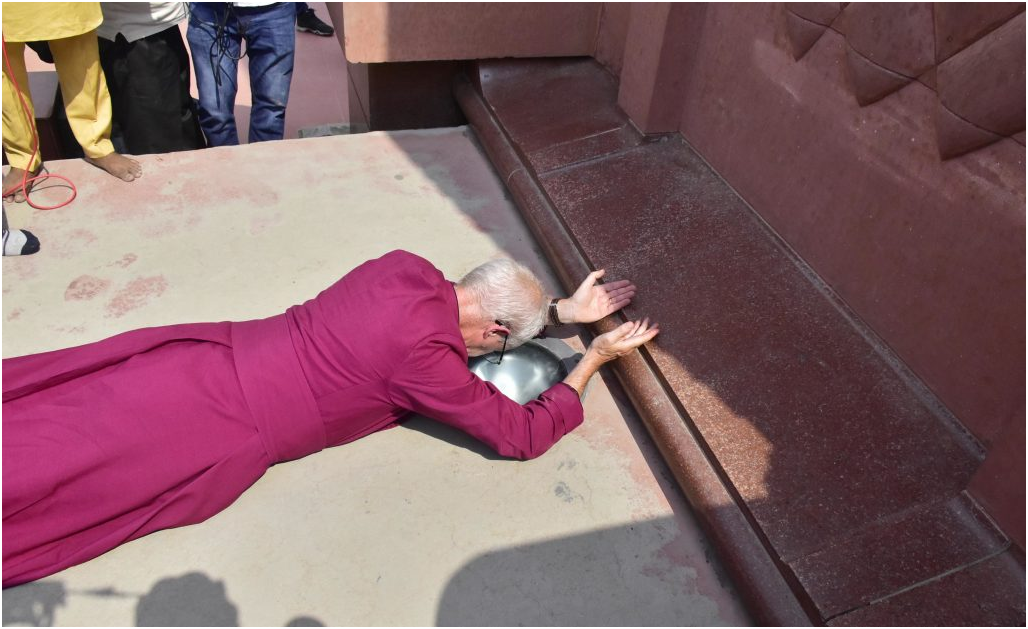