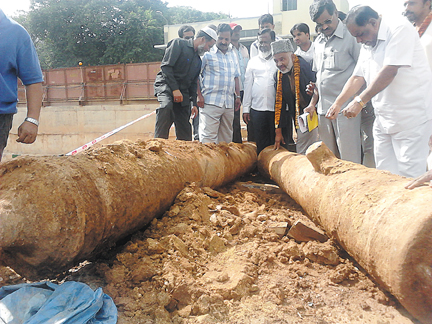 The discovery of two heavy cannons while the BMRCL (Bangalore Metro Rail Corporation Limited) was on an excavating spree for the metro could just be the tip of the iceberg. For the time being, the BMRCL have suspended operations at the site of the discovery, but the officials are tight lipped on the future course of action in this regard. The Archeological Survey of India has engaged its staff in the process. Historian Prof. Narasimiah who is an expert on the history of Hyder Ali and Tipu Sultan is of the opinion that further excavations must be carried out in the area to unearth more belongings to the reign of Tipu.
What is interesting is that these findings have come to light closer to the Tipu Palace and the Tipu fort in the city on the stretch of the road just before Vanivilas hospital. Recovery of two cannons believed to be from the Tipu era is quite interesting, considering the fact that this area was the old city of Bangalore which was well protected by the fort then. The excavations using heavy machineries have been slowed down and the use of manual manpower was employed for the safe recovery of this treasure near the area where these relics of Tipu have been found. It will take some more time for this priceless treasure to be shifted to safe hands before an actual inventory is made and registered with the Archeological Survey of India. Each of these cannons weighing more than 1000 kgs and the cannon balls weighing 10 kgs have been shifted closer to the place of recovery. The news of the recovery took Bangaloreans by surprise and people began to swarm at the excavation site. Chikkarange Gowda, President of the Tipu Sultan Prachara Samiti says, “We demand more excavations to highlight the vision of the techno-savvy ruler who was known for his magnanimity”.
Going down history, these findings could tell us what could have happened during the 3rd Anglo-Mysore war fought under Lord Cornwallis, the then governor general of India, leading large contingents of sepoys and soldiers from the Madras presidency and Bombay presidency, in nexus with the Maratha Peshwas and the Nizam of Hyderabad, in a close knitted conspiracy to destroy the might of Tipu. It is this incident that rattled the Mysore kingdom with destruction of the Bangalore fort, Nandidurga, Savanadurga and Devarayadurga forts.Subsequently, Tipu entered into an agreement called ‘Srirangapatna Agreement’, ending the war. The agreement bled the kingdom economically where in a sum of Rs 3.3 crore was paid to the British. Half the amount was taken immediately during the signing of the agreement and the rest was paid in a year’s time. Tipu pledged his two sons as guarantors apart from losing half the area of his kingdom.
At the end of the 3rd Mysore war, Tipu was left with 50 per cent of his men and armory, but still had enough fire power comprising of nearly 2000 cannons enough to mount a lethal attack on the enemy. At the end of this war, the British were pursuing Tipu to sign a ‘Subsidary Alliance’, which would have reduced Tipu to the status of a slave. But his refusal to sign this agreement prompted the British to declare an all out war called the fourth battle of Mysore. This war resulted in the killing of Tipu Sultan on May 4, 1799 in the battle field with key conspirators being Mir Sadiq who switched his loyalty during the crucial war. At the end of the war, the Mysore kingdom was restored to the Wadiyars who then signed the ‘Subsidary Alliance’ with the British.