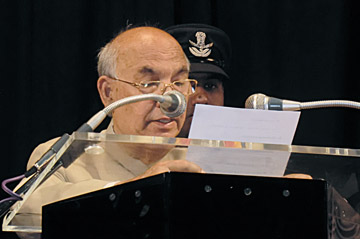 Intellectuals from India, Pakistan, Bangladesh and Japan who gathered here to celebrate the memory of Urdu’s finest short story writer Saadat Hasan Manto agreed that Urdu literature has produced no iconoclast greater than Manto.
Manto pulled out the masks of middle class morality, clashed openly against the conventions of time, constantly hacked at the layered cloaks wrapping the society and smashed to smithereens the reputations of those who occupied the high moral pedestals. He exposed the clerics, the champions of religions, peddlers of paradise and the merchants of intolerance. He spared none, not even Uncle Sam who had begun clawing for influence and criticized Pakistan’s fatal embrace of the superpower. His acerbic writings turned all his friends away from him. In the final years of his life, he stood alone, having lost all his friends to various lobbies he had annoyed.
Manto of course migrated to Pakistan. But his heart was stuck in Bombay. He left Indian shores but could not embrace Pakistaniyat. Ismat Chughtai chided him for being an opportunist. Manto found himself in a singularly unfortunate position of the State calling him a ‘Progressive” (i.e., Leftist) while the progressives themselves were dubbing him ‘Reactionary’.
Manto reduced to shreds the false veils of modesty and transformed the remorselessness of the genocide into dark comedy. Suffocation he felt among those who cloaked themselves with religiosity reflected itself in full flow during the final five years of his writings which he spent in Lahore, writing for a host of journals. His short story collection Siyah Hashiye etched to relief the bestiality of men which he witnessed during the Partition riots. Some of his contemporaries accused him of employing obscenity but now several of them realize that he did not indulge in voyeurism, nor even resorted to it to enhance his commercial appeal. He was employing such visual images to awaken the somnolent humanity among his readers. He was constantly in search of the last remnant of humanity even in the most bestial of men. The surgery of the society at his hands was often mistaken for autopsy.
He was pessimistic about Pakistan in the hands of clerics and consistently attacked the primordial prescriptions offered by such sections.
Among those who spoke at the International Conference organized by the All India Urdu Manch were Dr. Intezar Hassan, short story writer from Pakistan, Asghar Nadeem Sayed from Lahore, So Yamane, Urdu professor Department of Asian Languages from Osaka University of Japan, Dr. Mushtaq Khizar and Dr. Ghazanfar Iqbal from Gulbarga. Karnataka Governor Hans Raj Bhardwaj delivered the presidential address. Noted Urdu writer Dr. Gopi Chand Narang read the keynote address. Writer Shaista Yusuf introduced the guest. Mr. Azam Shahid conducted the proceedings. Manch Secretary Khaleelur Rahman Mamoon welcomed the guests.
Karnataka Urdu Academy was scrupulously kept away from the venue and the programme.
(Report compiled by Maqbool Ahmed Siraj)