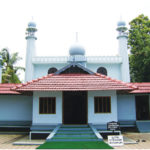 By Shafeeq Hudawi
The Cheraman Juma Masjid at Kodungallur, Kerala, built in AD 629, by Malik Ibn Dinar is all set to have a heritage museum along with a digital library. Touted to be first of its kind in the state, the museum will envisage the cultural history of Muslims in Kerala, while the digital library will feature the Muslim art and literary works. The project has been mooted by the Kerala Tourism Department as part of its proposed Muziris project, aimed at giving a boost to the history of Kodungallur. It will be set up in a plot adherent to the mosque. According to Dr. P. A Mohammed Zaid, president of Cheraman mosque committee, a panel of eminent historians and academics across the country has been formed for the implementation of the project.
Murals and paintings about the Muslim heritage will be on display, while audio-visual documentation along with photographs will be at the museum. “It has been decided to make it quite unconventional in narrating the rich history of Muslims in Kerala. Efforts are on to make it unique in terms of display and narration. All possible technologies will be utilised in a bid to draw history lovers,” Mohammed Zaid said.
(Source: twocircles.net)