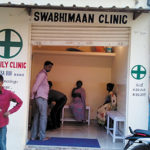 Swabhimaan, a registered Public charitable trust, founded by a husband-and-wife team, Venkataraman and Vijaya Iyer, has been managing a free medical clinic for the past 7 years in the slums of Rajendranagara, Koramangala, Bangalore.
Many years ago, when Venkatraman visited first visited this slum to provide an English teacher to a Government Urdu school, he realized that most families in this community were from economically-weaker sections, and that most men and many women were daily wage labourers. The inhabitants of the slums are from different communities”Hindus, Muslims, Christians and others. They lived in extremely unhygienic conditions, with poor sanitation, very poor quality drinking water and garbage all around. This meant that they were falling sick very often. A daily wage laborer not only loses his income if does not report to work for the day, but also spends at least 100 rupees on treating himself/herself. Also, the sickness goes round in the poorly-ventilated homes they live in, ensuring that on an average about 20 % of a family’s income was spent on medical needs.
Venkatraman believed that if he could start a clinic that would help both treat the people at a minimal cost and advice them on preventive measures, the money saved on treatment could help augment nutrition for their children. Thus started Swabhimaan’s clinic, in 2009, managed by a senior, committed, caring general physician by name Dr. Venkatesh Kumar. This clinic supports the medical needs of at least 40 sick people each day, apart from providing anti hypertensive and anti diabetic medicines at minimal cost for dozens.
Sensing the need for a clinic in the neighboring slums of LR Nagar, a second clinic was inaugurated on the 20th of October. It is funded by the Sahayatha Trust run by a couple, Alex and Usha Abraham. Dr. Asia Bibi is the manager of the new clinic. The charges are nominal.