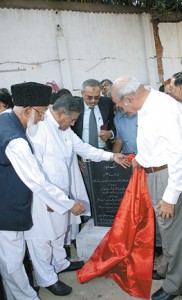 The Central Muslim Association (CMA) which lost a portion of its prime property in the heart of Bangalore city, to the Metro Rail project is now looking at new avenues. The Metro Corporation acquired 21,000 sq feet at Rs 29 crores from CMA, the remaining portion of 19,000 square feet is still with the CMA and the organisation is getting an annual rent of Rs 81 lakhs from this portion of the property. The fair compensation received has been spent judiciously and carefully with an investment on a property situated in Jayanagar second block at Das compound and the property opposite Das compound. The major portion of the land acquired will get a facelift with a commercial complex to be constructed by Bangalore’s Prestige Group, while the smaller portion where an hostel is likely to come up will be developed by India Builders Corporation(IBC) chairman, Ziaulla Shariff in the memory of his mother. The foundation stone was laid for the construction of the hostel building on January 5, by the Minister for Minorities affairs, K. Rahman Khan. Both the shopping complex and the hostel building are likely to be completed within 18 months.