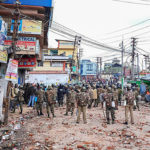 New Delhi:  Jamaat-e-Islami Hind (JIH) expressed concern over violence against the Sikh community in Shillong, Meghalaya, recently. In a press statement, Mohammed Salim Engineer, the Secretary-General at JIH said, “We are deeply concerned over the reported violence against the Sikh community in Shillong. The flare-up in violence against the Sikhs, which are a minority community in Meghalaya, over a trivial street brawl is highly condemnable and shows that some anti-social elements have been infected by the communal virus and are trying to divide people and instigate violence.” “In a multi-ethnic and multi-religious country like India, it is the responsibility of the majority community to protect the minorities,” Engineer stated. Jamaat-e-Islami Hind demanded that the culprits behind the violence in Shillong should be arrested and punished. “We appeal to the citizens of Shillong not to fall prey to any rumors and appreciate the role of the Sikh community which has contributed significantly towards the development of Meghalaya,” Engineer made an appeal through the press statement.
(TCN News)