Everyone is Good at Something The Beautiful People

Islamic Voice 0 January, 2015 12:00 am
A Mosque to Elevate the Mind
Jamia Sports Complex Named after Pataudi – Pavilion is named after Sehwag
National Seminar on Islamic Studies hosted by MANUU 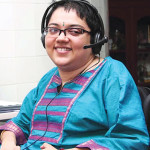 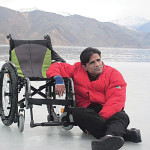 Over the years, I got many opportunities to attend conferences and summits about all sorts of things”from brand-building, addressed by ‘top’ advertising honchos, to promoting communal harmony, presided over by religious scholars. But none of these events radiated as much positivity as one I attended last month “¦.. The India Inclusion Summit 2014 in Bangalore!
The Summit brought together several hundred people to honour and celebrate persons who are remarkably able, despite being considered ‘disabled’ by some.
One of the most admirable aspects of the Summit was its simplicity “¦ no seminar “kits” with pens, writing pads or fancy bags or badges! As they say, starting the day with recognizing God’s light in our hearts makes the day smooth”and so was it at the Summit, too. A lovely bronze lamp lit by a differently-abled man on a wheel chair, along with few more guests, set a spiritual start to the programme.
The Summit was not about special guests making long, well- prepared speeches. Rather, it was about physically- challenged individuals sharing their personal stories and narrating the amazing contributions they are making to society. V. R. Ferose of SAP India, the inspiration behind the Summit (and author, along with Sudha Menon, of the bestselling book Gifted: Inspiring Stories of People With Disabilities) remarked that the overwhelming response to the Summit was not because the entry to the event was free, but because of “goodwill gone viral.” That was no exaggeration at all! The packed hall at the Park Plaza Hotel buzzed with compassionate people who had arrived with hope and love in their hearts for the noble cause that the Summit espouses.
The host for the first session of the Summit, Preethi Srinivasan from Tamil Nadu, is the co-founder of Soulfree, an organization that works for people with spinal cord injuries. Growing up as a national-level swimmer and a state-level cricket player, Preethi had an accident which caused her to lose her identity in a split second. Once a bright young student and sportsperson, she has been confined to a wheelchair for over 14 years now. With her family as her backbone, she reached a state of equipoise that allows her to smile despite desperately heart-wrenching circumstances. She uses this new-found energy to spark the lives around her as a motivational speaker and to work for others, like her, who have been stricken by spinal cord injury.
With Autism
One of the many speakers that day was Navin Gulia, author, adventurer, social worker, and ex-Indian army officer. Despite suffering a serious injury at the age of 22, causing him to be bound to a wheelchair, he continues with his passion for adventure sports. Some years ago, he created a world record in adventure all-terrain driving by driving non-stop for 55 hours to reach the world’s highest motorable mountain pass, the formidable Marsimik La in Ladakh, at 18,632 feet. It is record that still stands! Navin runs an organisation called ADAA ‘Apni Duniya Apna Ashiana’ (Our World Our Home), which works for the welfare of under-privileged children.
Another speaker at the Summit was para-swimmer Sharath Gayakwad, who has the effective use of only one hand. He scripted history at the 2014 Asian Para-Games in Incheon, South Korea, by winning six medals to go past sprint legend P.T Usha’s record of most medals by an Indian in a multi-discipline event!
Listening to Ankit Rajiv Jindal speak was truly inspiring. Being visually-challenged has not stopped him from becoming a Marketing Manager with Wipro. Ankit says that he dreams of becoming a CEO one day!
Sanjiv Gohil from Gujarat may have extremely low vision, but that, he explained to the spell-bound audience, has not stopped him from climbing rock-faces, helping to handle a leopard and going on nature expeditions.
Ashwin Karthik, yet another of the truly inspiring people who spoke at the Summit, is the first engineer from India with cerebral palsy. He works with a multinational software company. He received the National Award for ‘Best Employee with Disability’ from the President of India, Pranab Mukherjee in 2013.
It was after ages that I heard old melodies”sung that evening by the Rajan Brothers”Roshan and Ritvick”artistes of All India Radio, Bangalore. Their visual impairment hasn’t come in their way of providing entertainment through music. The duo run the Diviniti Music Trust to promote music, and have set up the Saarang Music School at Jakkur, Bangalore.
Listening to the stories of individuals challenged in different ways was a truly humbling experience. Being amidst them compels you to reflect on how much we need to thank the Almighty for the bounties of the various faculties that He has bestowed on us.
As the Summit drew to a close, with the “Feel the Pride in You” song playing in the background, I realized that it was the visually-impaired who had the most beautiful eyes, that it was the autistic who spoke the most eloquently and that it was the wheelchair- bound who felt, in a sense, the most liberated. It was these who were the really beautiful people!
(Do check out www.indiainclusionsummit.com to be part of the journey of inclusion) https://www.facebook.com/IndiaInclusionSummit