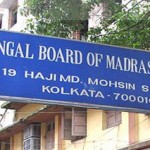 By Aditya Das in Kolkata

Kolkata: The first English medium High Madrasah will begin enrolling students for the 2014-15 academic session from March this year. The Madrasah Authority of Panihal, a village in Nadia district, 130 kilometres north of Kolkata has decided to set up the English medium high Madrasah at Patiala.
High Madrasahs in West Bengal are equivalent to High Schools and are affiliated to the State Secondary Education Board and teach all regular secular and modern sciences together with Arabic and Persian. Both Hindu and Muslim children study in them.
The English medium Madrasah was first conceived in 2010 by former Chief Minister Mr. Buddhadeb Bhattacharya who sanctioned Rs. 21 crore for setting up 14 such Madrasahs in 12 Muslim minority dominated districts of the State. Mr. Bhattacharya himself laid the foundation for the Madrasah in Panihal. The secretary of the West Bengal Board of Madrasah Education, Mr. Arfan Ali Biswas claims this to be a revolutionary step.
“It’s a welcome move”, says Dr. Sayed Rashed Ali, Professor of Islamic history, Calcutta University. Mr. Maskur Alam, an IT engineer, flashes a smile, “It was long overdue. We, the Bongs, are all but Anglo phobic. I wish I were a student”. Mustaqeem Ali, a garment retailer, utters optimism, “Our children will avail what we couldn’t think of”. Sayed Ruhul Amin, the general secretary of All India Minorities Association (AIMA), seemed philosophical, “It’s right and should have been so because the Muslims are meant to shine and grow”.
At present, West Bengal has 609 recognised Madrasahs. 102 Madrasahs are running under senior Madrasah Education System and remaining 507 are under High Madrasah Education system. 395 out of 609 Madrasahs are High Madrasahs, 112 Madrasahs are Junior High Madrasahs and remaining 102 Madrasahs are Senior Madrasahs, informs the http://www.wbbme.org, the website of the West Bengal Board of Madrasah Education.