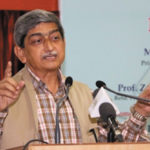 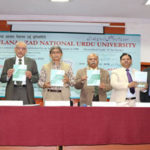 Book release function during the inauguration of the Fourth National Urdu Science Congress.