SBI pays just Rs. 12.87 for a Dargah of Ajmer Property
By A Staff Writer 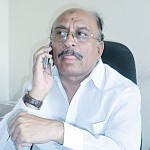 Bangalore: It might sound incredible. State Bank of India occupying a 5.7 acre property belonging to Dargah Khwaja Saheb of Ajmer in the heart of the city of Ajmer pays Rs. 12 and paise 47 towards annual rent.
The property was initially leased out to Alliance Bank of Shimla in 1864. It was later merged with the Imperial Bank of India (which was rechristened State Bank of India after independence). The initial lease was for 50 years which was extended for another 99 years in 1915.
This was revealed by Mr. Ubaidullah Sharieff, the President of the Dargah Committee Dargah Khwaja Saheb in a chat with Islamic Voice. Mr. Sharieff, who hails from Bangalore, has been appointed the President only ten months ago and has so far made around two dozen trips to overhaul management of the Dargah since he took over.
The said property was located within two kilometers from the Dargah in Civil Lines near the Collectorate.
Sharief said he had taken up the matter with the Chairman of the State Bank of India in Mumbai and represented the matter to Finance Minister Mr. P. Chidambaram through Minister for Minority Affairs Mr. Rahman Khan.
In a letter to Mr. Chidambaram, Mr. Shariff has stated that the very lease of the property was ultra vires of the Wakf laws as mutawallis had no power to lease a wakf property for a term more than three years in case of agricultural lands and one year in case of non-agricultural land. The letter further states that it was evident from the correspondence with the Bank that it was in no mood to vacate the property.
Mr. Shariff informed that the original lease deed was not available for decades together but could be retrieved from the Dargah Committee office recently.
He said the Dargah’s income from Hundi collection, a 180-room Guest House situated opposite the Ajmer Railway Station and the rental income from other properties was merely Rs. 7 crore annually. The expenditure being incurred was almost the same.
He said Moinia School located on a two-acre plot of land belonging to the Dargah had been taken over by the Government. The Committee is urging the government to hand over the school back to the Dargah Committee together with the land. Meanwhile, the Education Department has agreed that the land was dedicated to the Dargah as waqf. This school too was located on the Station Road.
He said the Committee had appointed some retired municipality officers to reassess the values of waqf lands under various tenants. He said the Government had taken over 13 villages belonging to the Dargah by enacting the Jagir Abolition Act and was paying Rs. 13,000 to the Dargah a year towards the rent amount.
The Committee also owns a building known as Sarai Chishti Chaman which had to date 110 tenants. It intends to turn it into a shopping mall by vacating the present tenants and constructing a new building.
It may be recalled that the Dargah Committee was headed by persons such as Tariq Anwar (NCP member of Lok Sabha from Bihar) and Syed Shahabuddin in the recent past.
(“See report on Development Plans for Ajmer Dargah” on page 8)