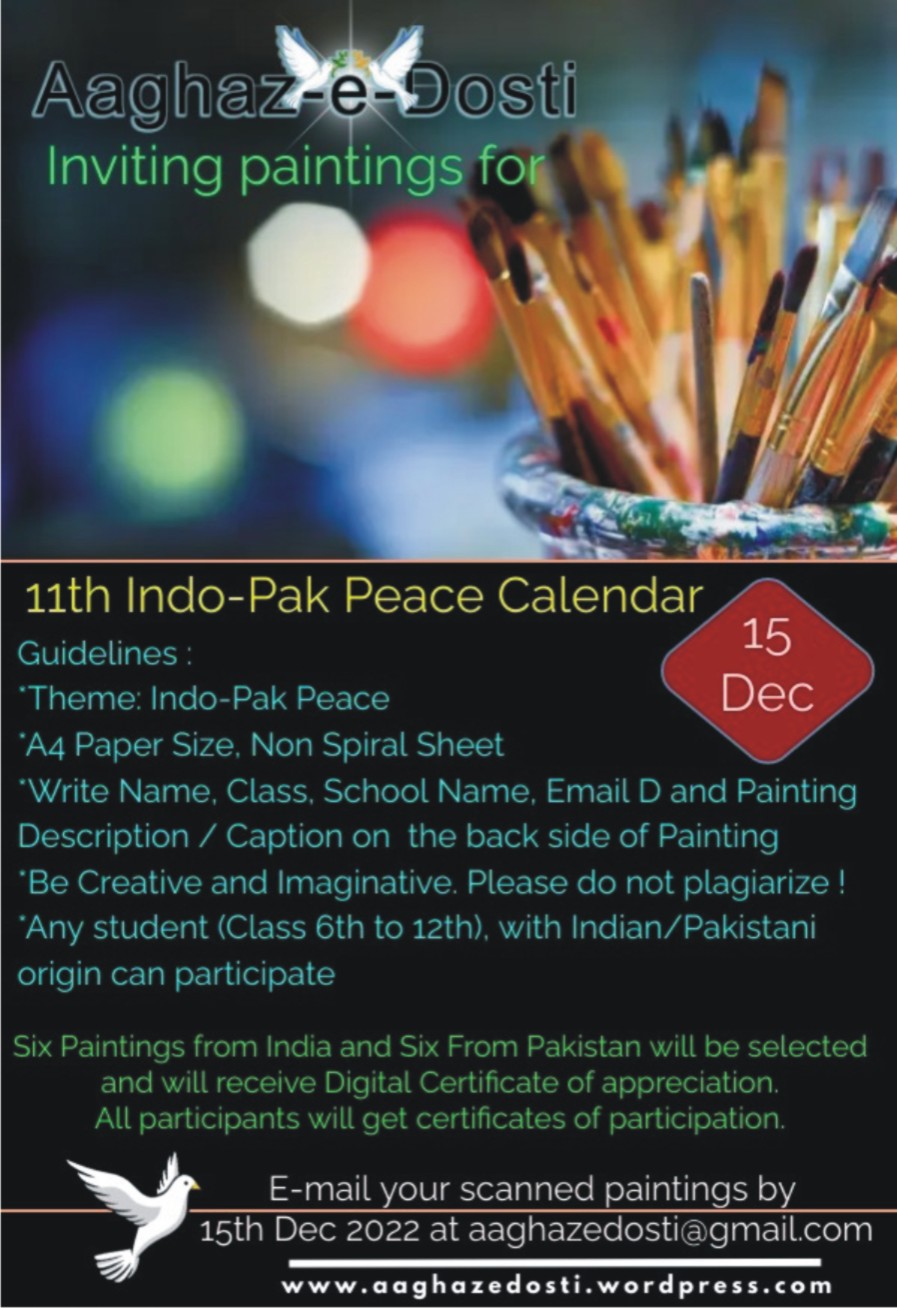 New Delhi: Students in India and Pakistan are participating in efforts for peace building at a time when geopolitics is dominated by conflicts and violence, particularly due to the Russia-Ukraine crisis. Being two nuclear-armed countries with a history of conflict and skirmishes, India and Pakistan are always seen as being particularly vulnerable because, even when these nations are not directly engaged in any hostilities, skirmishes, ceasefire violations, and other indirect effects of conflicts can be seen and felt.

For its 11th Indo-Pak Peace Calendar, Aaghaz-e-Dosti, an Indo-Pak Friendship Initiative that primarily works with school pupils on both sides, stated that it will be accepting peace artwork from students in Pakistan and India. This would be a special calendar where twelve of the greatest paintings (six from each of India and Pakistan) would have the opportunity to appear in peace calendars that are typically published on both sides.

When asked about the significance of this calendar, the initiative’s originator, Ravi Nitesh, stated, “The calendar with the artwork of an innocent and apolitical mind will remind us that mindsets have been built. The Calendar also features notes from persons who have been actively working to foster these ambitions, together with the lovely dreams of the young and innocent. This calendar is a collection of common hopes for friendship and peace. It serves as a common hope for others who suffer and have habits similar to our own. The hope will be revived as the pages change to begin a new month.

Aaghaz-e-Dosti, which has been operating since 2012, has already published eleven such calendars. We want to work with students because they will become responsible adults, and their future should be devoid of hatred, violence, and war. When kids produce art, it reflects their feelings, ideas, and dreams. We can tell that we probably need to learn a lot from these pupils when we look at these arts in the calendar. said Nazir Ahmad, the Pakistani branch’s coordinator for Aaghaz-e-Dosti.

According to Jansher Khan, a coordinator for Aaghaz-e-Dosti in Pakistan, students from both sides are genuinely expressing their right to peace by making such a calendar. According to him, neither side’s educational system provides students with the chance to understand the “other” side, and in some cases, it even fosters hostility. As a result, this calendar also presents a chance for young people to develop the potential for fostering peace and fostering the development of a better and more peaceful future.

We have built numerous hurdles to travel and communication over the past seven decades, but Nitin Mittoo, who oversees Aaghaz-e-Dosti activities in Punjab, said that despite this, we all still long for a time when people from opposite sides can interact without difficulty. To achieve this, we must put more effort into cultivating a culture of peace via education. He added that due to the many cultural parallels and a sense of unity, Punjabis have an emotional bond with those on the other side.

Looking at these artworks gives us the chance to comprehend how young kids can think freely and without prejudice as they attempt to convey their feelings for peace in various ways. said Aaghaz-e-Dosti member Ilma Iqbal.

Any student from sixth grade to twelfth grade studying in India or Pakistan, or any Indian or Pakistani student studying in another country, may participate this year as well under the same terms and circumstances by sending their scanned drawings to Aaghaz-e-Dosti.

This calendar offers a platform for many young people to join and volunteer for the cause without anticipating any concrete benefits, therefore it is also an endeavour to experience volunteerism, stated member Shruti Achesh, who frequently creates peace calendars. Himanshu Shekhar Parida, a sand artist, created this calendar last year.

Aaghaz-e-Dosti is a voluntary organization, and a network of young people from Pakistan and India assist in managing the programmes. Aaghaz-e-Dosti has received recognition and awards at various levels over the years, and numerous notable individuals and pillars of peace, including Dr. Asma Jahangir, Kuldeep Nayar, Kamla Bhasin, Dr. S. N. Subbarao, Swami Agnivesh, Dr. I. A. Rehman, Ela Gandhi, Dr. Shashi Tharoor, Mubashir Hasan, Dr. Salima Hashmi, and many others have supported the initiative through their messages and participation.