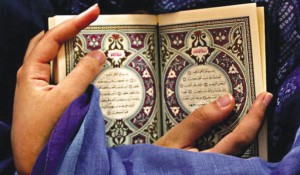 Indore: Rabiya Khan, a visually challenged law student, who wanted to make it possible for all visually impaired people in India to be able to read the Quran, has compiled 10 paragraphs of the holy book in Arabic Braille after tireless efforts of four years. The compilation she has created was distributed at the RNT Auditorium in Indore on July20. “So far, the Quran is available in Braille in only four countries. It is not possible for everyone to get a copy,” Hindustan Times quoted Rabiya Khan, who runs the Madrasa Noor Research Institute for the blind in Indore’s Chhaoni locality.
“There was not a single copy of the Quran in Arabic Braille in the state. I found one in Mysore and another in Mount Abu. My family finally traced the whereabouts of the publishers in Karachi (Pakistan) and got it,” said Khan, who teaches the Quran to more than 70 visually-impaired youngsters. Braille is a writing system that uses raised dots on paper to assist the visually impaired to read. Khan, however, is not sure when all chapters of the Quran will be available in Arabic Braille. “We will have to seek financial contributions since it is an expensive task. The cost may even go up to Rs. 1 crore, if it is published on a large scale,” she said.