Is it Swansong for Amanath Bank?

Islamic Voice 0 July, 2013 12:00 am
MoU Signed to Give Facelift to Ajmer Dargah
Hajj Maybe Entrusted to Minority Ministry
123 Waqf Properties to return to Delhi Waqf Board

By A Staff Writer
Bangalore: 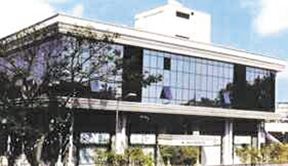 It seems to be the swansong for the Amanath Bank. The recovery of loan process launched last month by auctioning the mortgaged property seems to be leading nowhere. Meanwhile there are contradictory signals on Bank’s merger with other banks.
Depleted of its funds and mortgaged properties under litigation, the Bank is fighting am increasingly losing battle for survival with the Bank officials issuing misleading statements about merger. Chairman Naseer Ahmed, MLC, who took over the Bank’s chairmanship only eight months ago, is only a hapless hostage of the situation between the depositors and the former captains of the bank who owe huge sums to the bank and are still capable of turning the screw from the Centre in the eventuality of his (Chairman) taking any decisive action. In the race for ministership in the newly formed Congress government in the State, Naseer Ahmed is in no mood to displease his godfathers in the Congress Party. He is therefore not likely to initiate any measures that would amount to treading on the toes of the bigwigs whose names top the list of defaulters and who can scuttle his ministerial prospects.
On May 26th, the Bank assured a huge crowd of agitating depositors that talks were on with the Canara Bank to merge the Bank. A statement from the Bank’s Officer on Special Duty, Mohammad Akmal was also carried by the Daily Salar to this effect in its issue dated June 26. But it seems the statement was merely a temporary tranquilliser to buy peace with the crowd which was baying for the blood of the Bank’s management. The depositors were about to go in a procession to present a memorandum to the Chief Minister. But the “merger assurance” stalled the move that would have gone against his (Naseer’s) induction into the impending expansion of the cabinet. The deposits of nearly two lakh depositors lie frozen with the Bank as the Reserve Bank of India has placed a moratorium on the transaction exceeding rupees one thousand for each account holder in six months from April 1 onwards.
The news of the merger was promptly denied the very next day by the Canara Bank which said there was no proposal before the Canara Bank to effect merger of the Amanath Bank. A Bank official, who refused to be identified said: “The merger was a process, and not an event”. The wordings were significant and exposed the lies that the Amanath Bank management had been spewing all the while. However, this denial from the Canara bank was not carried by the Daily Salar, several of whose trustees are included among the defaulters.
Latest turn of the events suggests that the Amanath Bank management is trying its utmost to push the situation towards liquidation of the Bank in order to bury all the scams that enabled several bigwigs formerly associated with the Bank to make fortunes. It is learnt that during the last one month, several well-meaning businessmen, which include a leading builder and a Mining group, came up with proposals to retrieve the Bank from its present crisis by pumping some money. But they were dissuaded from initiating any move that would revive the Bank, lest the two decade long scams would come into open. There is also the fear that revival of the Bank and restoration of its transaction would immediately bring the depositors to the queue to withdraw their money. With distrust running high, this is immensely predictable. The Management therefore finds the liquidation option the safer bet and revival highly risky.
Meanwhile, the RBI deadline of six months is fast approaching for the regulating bank to wield its axe against the Amanath Bank which has failed to recover the bad loans. The action on auctioning the mortgaged properties has so far yielded very little with major properties under litigations.
The liquidation of Amanath Bank would be considered a collective failure of Bangalore’s Muslim elite as depositors would get very little of what the Bank owes to them. But the closure of the Bank would be a even bigger loss for the small depositors who found it accessible for small entrepreneurs such as tempo owners, auto-rickshaw drivers, burqa-clad women engaged in petty business activity who found it convenient to enter the bank’s premises and get their work done while speaking in Deccani Urdu.