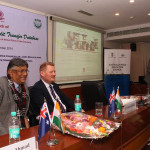 New Delhi: The Australia-India Credit Transfer Database Portal was launched at a function in Jamia Millia Islamia, New Delhi.  The Australia-India Credit Transfer Database Portal will enable students in both the countries to identify the academic programmes that they could undertake in Australia or India and earn credit in their home country. The objective of this initiative is to enhance student’s mobility between Australia and India by increasing awareness of existing credit transfer arrangements.
Mr. Bernard Philip, Acting High Commissioner, Australian High Commission, New Delhi dwelt upon the details of the Student Mobility Project and thanked Jamia Millia Islamia for developing a database of credit transfer arrangement between Indian and Australian universities. Around 274 academic arrangements of 76 Indian institutes have been mapped with 11 Australian institutes and 28 academic agreements of 5 Australian Institutes are mapped with 23 Indian institutes in addition to various long term and short term programmes. He averred that the launch of the Australia-India Credit Transfer Database Portal was a sign of robust bilateral relationship between the two countries that followed the fruitful visits of Prime Minister Tony Abbott and Prime Minister Narendra Modi to India and Australia respectively this year.
Prof. Talat Ahmad, Vice Chancellor, Jamia Millia Islamia, speaking at the launch-event, spoke of opportunities that would be available to students in both the countries to study subjects of their choices and earn credits under the Choice-based Credit System. He lauded the efforts of the Australia India Education Council (AIEC) to expand collaboration in education, training and research that has taken the academic collaboration between the two countries to a higher level.  The outcome of this initiative, he felt, was evidenced in the New Colombo Plan for Australian students and the Endeavour Scholarships and Fellowships for Indian students and researchers.
Mr. Ben S Kelly, First Secretary (Education and Sciences), Australia High Commission, conducted the programme that also had a presentation by Dr. Shane Kazim  Naqvi, Additional Director, FTK-Centre for Information Technology, Jamia Millia Islamia on the operational and technological aspects of the Australia-India Credit Transfer Database Portal.